Indians in a Box: Stories From the Indian Boarding School 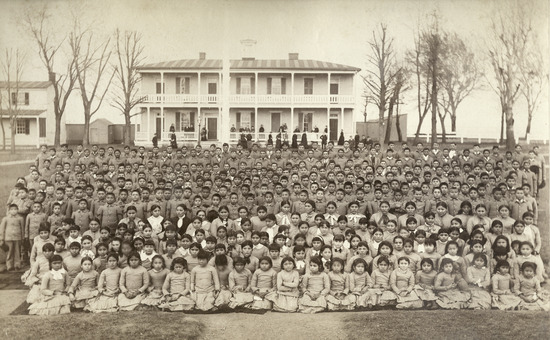 Based on first person narratives, videos and historical documents, this touching, funny and gritty collection of stories depict the reality and repercussions of the American Indian Boarding School system from the late 1800’s to the present. Children were often forcibly taken to off reservation schools hundreds of miles across the continent to break tribal ties and authority. The motto of the schools, coined by General Richard H. Pratt, was “Kill the Indian, save the man” which translated into blotting out all language, tradition, culture and familial ties. The American Indian Boarding School system was devastating to children and their families – the effects of which can still be felt today.

Created and performed by the Native Voices Artists Ensemble.

Reviews
“The show, a series of dramatizations from different decades and involving different tribes, is designed as an educational vehicle, and in that it succeeds utterly. In one particularly moving sequence, a young girl (understudy Olivia Espinoza) who’s been violated by a school employee kills her newborn out of shame for her sin. In another, we watch as the appalled and unhappy students are shorn of their hair.” Stage Raw, Deborah Klugman

“…engaging 70-minute show by director Robert Vestal and the nine member ensemble from Native Voices at The Autry. Using narrative testimony and historical documents, the show paints a vivid — and saddening — picture of the forced cultural, psychological and spiritual indoctrination of Native –American children, starting with a long ride in the “ iron box,” and culminating with residency in schools that were often hundreds of miles from their homes.” Stage Raw, Lovell Estell III