Shakespeare's Last Night Out (or What? YOU, Will??) 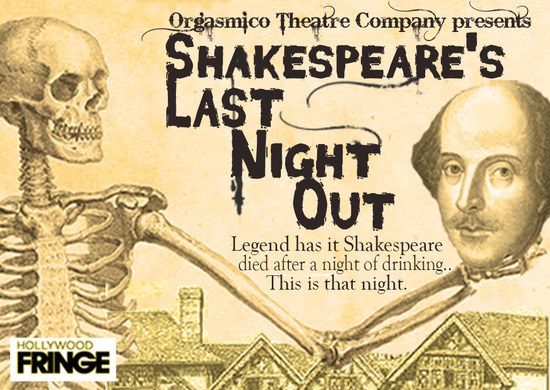 “Let all future doubters feel my sting
– that I not only writ my plays…
…I also sing!”

Legend has it Shakespeare expired from a fever after a night of drinking. Raise your cups with the mysterious Bard of Avon on his “last night out” as he defends his authorship against doubting canker blossoms. From the multi-award winning Orgasmico Theatre Company comes a bawdy journey of song, recounting the secret events and odd characters who shaped the greatest writer of all time.

“LA Weekly, “Shakespeare as a Rock Star…For sheer entertainment value and uncanny comic timing, Shaw’s dozen-song impersonation of an alcoholic and dissipated Shakespeare on the eve of his death — defending his authorship from posterity’s naysayers — can’t be beat.”
-Bill Raden, LA Weekly

“…overall, this is the apex of this talented artist’s work up to this point and his medieval pop score is unmatched in its wit and originality…”
-Colin Mitchell, LA Bitter Lemons

“Gold Medal Winner – Shakespeare’s Last Night Out” is a wonderful show, both funny and touching, that should not be missed!"
-Earnest Kearney, thetvolution.com

“This tavern musical is a must see for any adult looking for a night of intellectual literature and folk rock songs over a drink.”
-Laura Tull, Examiner.com

“LOVED IT!!! Fisher is masterful in his portrayal of William Shakespeare – incredibly fluid in his movements, fully transforming from character to character & bringing the audience along for a ride they’d never forget.”
-Cyanne Mcclairian

“…One of the tightest pieces of theater I have seen yet. Please go see this!”
-Lindy Voeltner

“I really loved this crazy new rock musical…It’s the kind of show that embodies all that is the best about fringe.”
-Ellen Dostal, Broadway World (Werewolves of Hollywood Blvd 2014)

“It’s a blast.. The show’s tongue in cheek vibe is right in the Rocky Horror veign."
-Lyle Zimskind, The LAist (Werewolves of Hollywood Blvd 2014)

“May these werewolves howl for a long time to come."
-Rob Stevens, Haines His Way.com

“Always delivered with delicious gusto.. As with the rock score and entertaining lyrics, there isn’t a false note among the cast."
- LA Weekly

“My socks were knocked off over and over again.”
- LA Examiner

“Wildly exhilarating.. As effective a rock musical as anything since “Hedwig and the Angry Inch.”
-Backstage

“It’s all just so lovely and sad and complicated, and most of all, hilarious."
- LA Splash