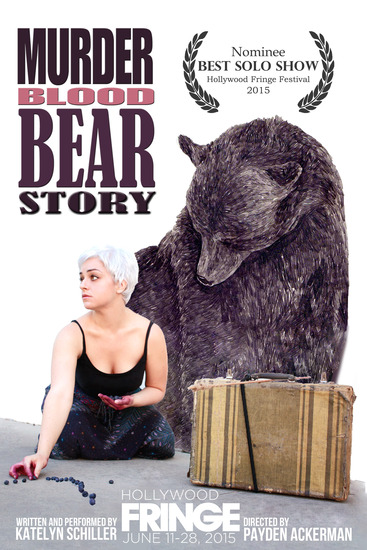 CRITICS SAY:
“For all the satisfaction that Schiller’s buoyantly vivid performance provides, none of us who join in on her hunt gets to escape the realization that happiness is dangerous prey.” -Lyle Zimskind (Stage Raw)

“This is a play, more than most solo theater pieces one can see at the Hollywood Fringe or elsewhere; it’s a crafted and affecting artistic exploration, not an exercise, not a whim.” -Jason Rohrer (Bitter Lemons)

“This is the show that had me truly awestruck at Fringe previews! Highly visceral and intuitive it is one of the most beautiful and emotionally vulnerable pieces you will encounter at Fringe this year.” -Tracey Paleo (Gia On The Move)

“Schiller’s work is poetic, complex, deep, and challenging. Each of the stories built on the last, not linearly, but emotionally. It was one of those moments when we understand the power of theatre in the hands of a great actor.” -Paul Janes-Brown (Maui Reviewer)

AUDIENCES SAY:
“Luminous. A delight. An experience. I had no idea what to expect walking into a play about searching for happiness. What I found was lightning in a bottle.” -Ben Moroski (The Wake)

“This is storytelling at its finest.”
“Happiness sought and happiness found.”
“This piece defies categorization!”
“The vulnerability and joy of Katelyn Schiller hit me in ways I did not expect.”
“Katelyn Schiller is a mirthful creature who bounces around the stage with the grace of a ballerina, the control of a trained athlete, and the uninhibited wonder of a child.”

ABOUT THE PLAY:
When you’re sad, what if you could send a piece of yourself to find your happiness again? What if that piece found “happiness” somewhere unexpected?

Blue is happiness hunting. She’s tracking a bear through the wilds, hoping for an up-close encounter. Suddenly, the birds go silent. There’s a crack of a low lying branch. She reaches for her bait: a handful of plump blueberries and a pocketful of stories.

Does her happiness lie in the bear she’s hoping to meet?

A quirky experimental solo show, MURDER BLOOD BEAR STORY, is about the elusive, captivating, and sometimes harrowing search for happiness. Written and performed by Katelyn Schiller. Directed by Payden Ackerman.

Are you ready for the hunt?