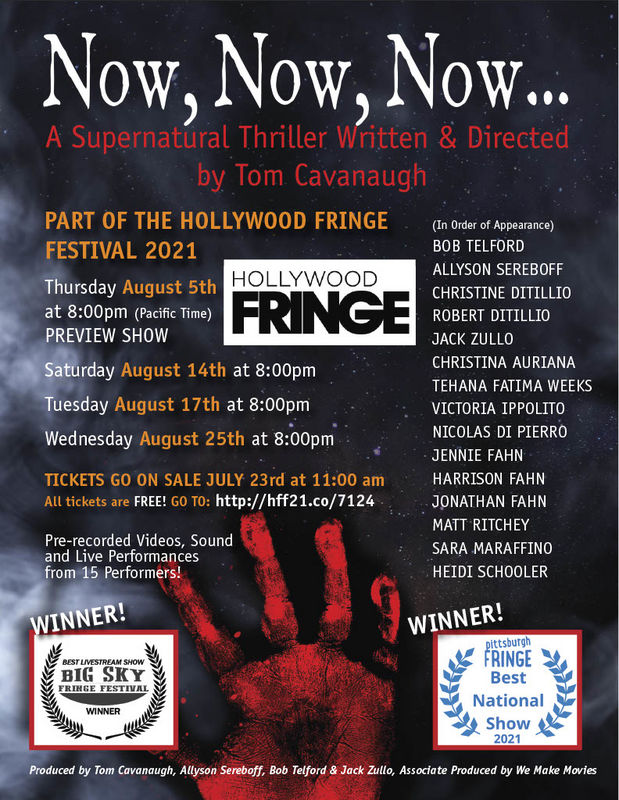 The show centers on characters that are receiving a mysterious email, a children’s song with a series of numbers at the end. The song places the readers in a trance-like state causing strange people and events to enter their lives. The song and its encoded message goes out to millions and seems to be part of the larger plan, a possible invasion. People are being kidnapped and their loved ones are left behind to solve the mystery and fight back, but will they?

Now, Now, Now… is Tom Cavanaugh’s "Passion Project through the Pandemic! He says, “I was sitting home watching Zoom workshops, Zoom performances and wishing I could be back in a theatre somewhere! I thought, why wait for the virus to end? Why not learn how to navigate this new media and try to create a production that would combine everything I love about film, television, and live theater, and here we are!”

Cavanaugh is Hollywood Fringe Alumni having debuted in 2014 with The Last Remnants of Cops, Robbers & Hollywood Cowboys. Cavanaugh produced and directed the 2017 BEST SOLO PERFORMANCE show, UNDER THE JELLO MOLD in 2017.