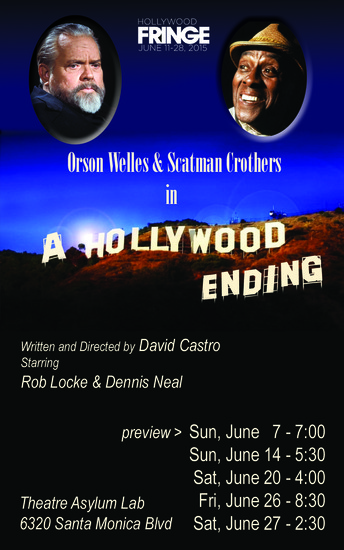 ‘Orson Welles & Scatman Crothers ’ in “A Hollywood Ending” could almost be called “A Couple of Hollywood Guys Sitting Around Talking.” With one of those guys being Hollywood legend Orson Welles, the man who wrote, directed and starred in ’Citizen Kane’, considered by many to be the single greatest film of all time. And the other guy being Scatman Crothers, maybe the prototypical “I know that guy from somewhere, just can’t remember his name.” Each did everything. Welles wrote, starred, directed and produced and Scatman did everything else – actor, singer, songwriter, bandleader, comedian, emcee and cartoon voice-over specialist. In 1985 they -the legend and the journeyman – had been in showbiz for over 100 years combined. In that century they’d never worked together. That all changed when they auditioned for and got parts in ‘The Transformers: The Movie’, an animated film based on the TV cartoon show and predating by years the billion-dollar live-action movie franchise. It was the last job for each of them. Welles died a week after his voice work ended and Crothers died some months later. It is my hope that you will get a much better appreciation and feel for both Welles and Crothers from their conversation and the topics they touch upon based on the lives they led, the work they did and the times they lived in.