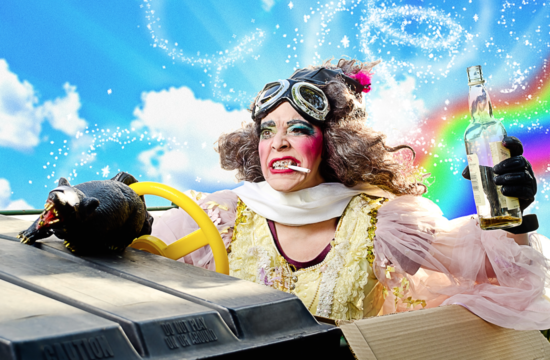 THE SHORT BUZZ:
A child’s birthday party takes an unexpected turn when the scheduled magician doesn’t show and the job is filled by a drunk and wayward vagrant. There are prizes. You should come.

THE LONG BUZZ:
Poor Tristan’s completely respectable birthday party is about to be ruined by drunk and wayward magical vagrant ‘Princess Magic’… and this time, she’s brought along some friends.

Princess Magic, played by magician Misty Lee (Penn and Teller’s Fool Us, NBC’s 1st Look, Ovation TV’s ‘The Art of’) has been performing around Los Angeles since 2008, and sadly she’s still lacking taste.

Best described as ‘a variety show that’s really just a parade of a**holes’, the 30-minute Fringe show’s premise revolves around an uptight mother (played by Kija Rae) trying to make do when her son’s birthday party magician no-shows – and Princess Magic and her pals are the only entertainment available.

In addition to Misty Lee and Kija Rae, the show features music, burlesque, and a powerpoint about goats. Bella Luna, Spencer Frankeberger and Paul Dini round out the cast – all of whom will probably embarrass themselves, and likely be kicked out.
Production team includes Bradley Pierce (Jumanji, Beauty and the Beast, Detective Pikachu) and Jeanne Valleroy.