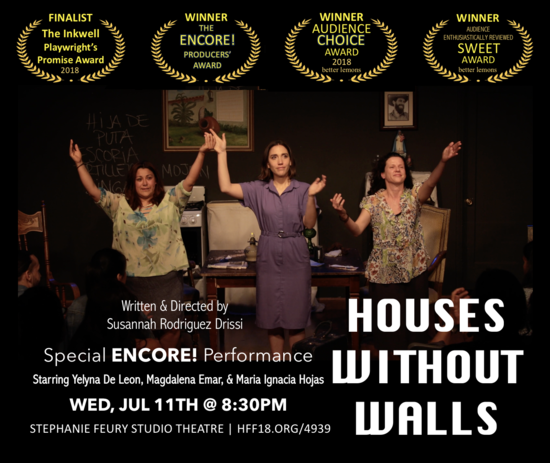 Praised by national & international scholars, audience, critics, and industry alike, this is a MUST-SEE performance!

This one-act play portrays two generations of women coping with motherhood and madness in the aftermath of the Cuban Revolution of 1959. Torn between historical and personal traumas, and love, fear, and resentment for their daughters, Candela and Gloria’s stories are almost impossible to tell apart. Each day, without reprieve, they speak to themselves and to each other across a wall. One day, however, the wall no longer holds, and Candela and Gloria come face to face. They simply can’t forget—if anything, they remember too much. Likewise, their daughters—now women living in exile—grapple with lives turned upside-down by history and personal choices. Their mothers will die without them. Their own daughters, too, will leave them one day. Ultimately, HOUSES WITHOUT WALLS reminds us that motherhood, like a revolution, is a life-altering event—often wrought with obligation, madness, and pain. Read an excerpt at LCG Lounge: http://www.lcgeditores.com/blog/2017/12/4/houses-without-walls-by-susannah-rodriguez-drissi

“[…] ‘When we leave, we take nothing with us.’ Yet it is exactly this “nothing” left behind that is the central presence in Houses Without Walls — the oppressive presence of absence. The immensity of a loss and unknowing that sits thick in the air, drowning the inhabitants in the molasses of memories of the past and anxieties of the future. A MUST see.“ Juli Crockett, American Playwright & Director

“Susannah Rodriguez Drissi has found a uniquely theatrical way to convey the inter-generational pathos and humor of displacement, exile and re-connection — this is a deeply lyrical, earthy and compelling piece of theatre.” Guy Zimmerman, Award-Winning Writer, Director & Producer, Padua Playwrights

“Houses Without Walls poignantly shows us the emotional and psychological challenges that Cuban mothers and daughters face during the diasporic conditions following the 1980 Mariel Boatlift. As poetic as it is abstract, this is the language of theatre.” Beatriz Ortega, Producer, Jeronimo Stage. Los Angeles / Madrid | Associate Producer, The Los Angeles Theatre Center

“Houses Without Walls is an extraordinary work exploring the topical issues of emigration, physical and virtual borders and the difficulty of communication between two generations of women. […] This is a play that clearly captures the pain of physical separation and distance at a time when the plea of refugees and the politically justified need to build walls test our humanity daily.” Carmen Levick, Ph.D., Department of Theatre University of Sheffield, United Kingdom

See PRESS above for ALL reviews.