Nights at the Algonquin Round Table 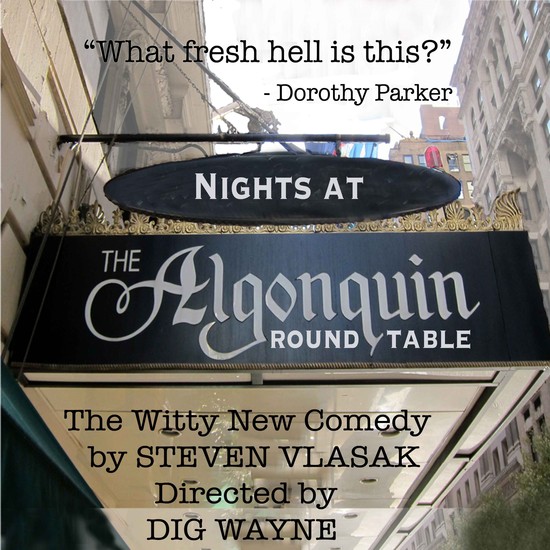 The acclaimed Roaring Twenties comedy “NIGHTS AT THE ALGONQUIN ROUND TABLE” has now concluded it’s SOLD OUT 2017 Fringe Festival run. Please follow these wise-acres on www.facebook.com/algonquinwits or Instagram for heaps of pretty pictures, backstage drama, and updates on future performances and theatres as the Round Table rolls on across America.

Proclaimed by Better Lemons as “DOUBLE SWEET” and one of the “TOP TEN BEST REVIEWED FRINGE FESTIVAL PRODUCTIONS,” your interest and support helped make this one of the most acclaimed and popular of all the Fringe Festival ensemble shows. The play was awarded a Gold Medal ranking from Ernest Kearney at theTVolution, a “Recommended” from KPFK’s Julio Martinez and Stage Raw, and a Better Lemons “Double Sweet” Top Ten rating out of all 375 festival offerings. (https://better-lemons.com/production/nights-algonquin-round-table/) “What’s it about?” I hear you thinking:

Flappers. Prohibition. Hot Jazz. It’s the height of the Roaring Twenties, and there’s a new kid in town. The town is sophisticated New York City, and the kid is some homespun hick wannabe determined to make a name for himself as a journalist by impressing the funniest and most famous writers on Broadway. But it’s going take more than a sharp tongue to triumph in a literal — and literate — battle of wits with notorious wise-crackers like Dorothy Parker, Robert Benchley and George S. Kaufman.

The Roaring Twenties come roaring back to life when Hollywood’s The 3 Clubs is transformed into New York’s legendary Algonquin Hotel during the Age of Wonderful Nonsense, that era’s SNL/TMZ, when the brightest lights on Broadway gathered almost daily to one-up one another with their caustic quips and clever conversation, in this smarty-pants new comedy from award-winners writer Steven Vlasak and director Dig Wayne.

“Everything I like is either illegal, immoral, or onstage in this play.” – Alexander Woollcott

“This is the best show I’ve ever seen that I myself didn’t write.” – George S. Kaufman

“You CAN lead a horticulture. Invite her to see, “Nights at the Algonquin Round Table.” – Dorothy Parker

“This play is fantastic, and so is this play.” – Robert Benchley

“What fresh hell is this?” – Dorothy Parker