R&J, a gender-reversed Romeo and Juliet 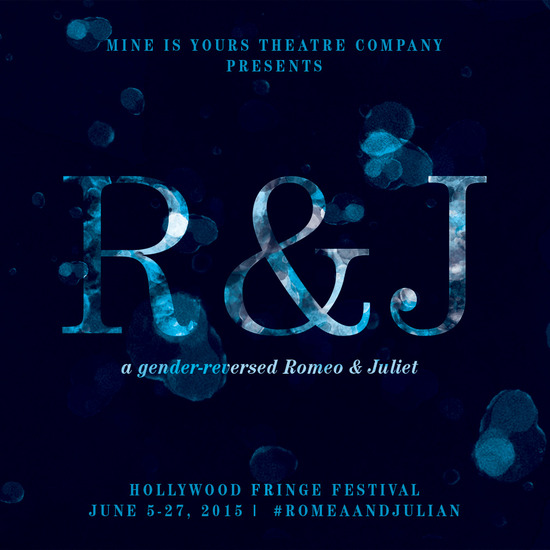 “ALL AROUND SUPERB… R&J, A Gender-Reversed Romeo And Juliet is AS MUST-SEE AS IT GETS”
— Steven Stanley, StageSceneLA
(Full review here: http://www.stagescenela.com/rj-a-gender-reversed-romeo-and-juliet/)

“#SEEITLA – Even if you’ve seen R&J 30 times, you haven’t seen it like this.”
— Kat Michels, #SeeItorSkipItLA Correspondent

In R&J, all the male characters are now women, and all the female characters are now men. The world is dark and dreamy and “here all eyes gaze on us.” The brooding Romea falls in love with cloistered Julian, each opening up something in the other as their story swiftly unfolds. With 8 actors and 90 minutes, R&J hurtles forward, but still manages to catch your breath and fills you with our lovers’ hope.

If you were to meet a human who was raised with the freedom and privilege to be bold and unabashedly honest and open, is that human automatically “male” or “masculine”?

If you were to meet a human who was raised as currency for their parent to profit from when they became of age, and therefore has been cloistered from the world and trained to be a perfect prize to be won, is that human automatically “female” or “feminine”?

What has our society taught us about the parameters within which males and females must live to be palatable to the general public and general audience?

“Beautifully staged, beautifully conceived, beautifully acted. It was truly the best production of Romeo & Juliet that I have ever seen. It is a must see for fans and cynics alike. You will love it.”

“BEST balcony scene ever, BEST death scene ever, Best “one night together” ever, Best chemistry between R & J ever. The gender reversal is amazing to see and hear. DON’T miss this production. You’ll thank me."

“this production was ELECTRIFYING. my heart was racing throughout. i was blown away by the vision. the direction and performances were uniformly superb. certainly my favorite of the festival.”

“Mine is Yours’ gender-reversed production of Romeo and Juliet is heartfelt and entrancing… The gender reversal frees the passions, dilemmas, and relationships of the characters from their ties to masculinity or femininity and instead highlights their undeniable humanity… A must-see!”

“The story and the language were crystal clear… The gender bending concept was fascinating and truly thought-provoking. It was amazing to see a play that one is very familiar with, through a whole new lens. It was great and great fun!”

Produced by Mine is Yours Theatre Company (Twelfth Night, 2014 ENCORE! Producers’ Award)

*Member of Actors’ Equity Association, The Union of Professional Actors and Stage Managers in the United States

Use discount code JULIAN for $12 tickets!

mine is yours theatre company *