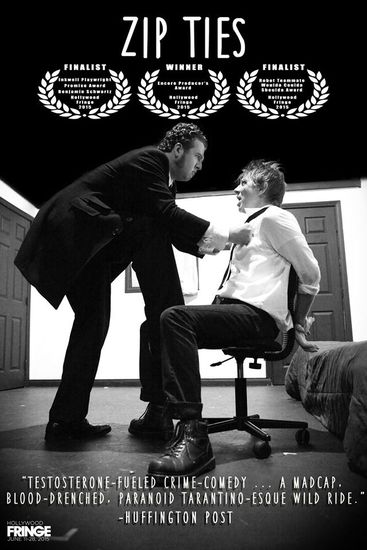 “A richly insane, rapid-fire comedy… Audience pleaser from start to finish.” – Gia On The Move

“This show is a lot of fun… Snappy dialogue…A black comedy through and through.” – Bitter Lemons

“(Zip Ties) is written well, directed well, performed. The whole package… SEE IT!”
- See It Or Skip It LA

Do you have a twisted sense of humor?
Good.
We do too.

This story untangles in one continuous hour. There are no scene or location changes. Just rapid-pace dialogue and door slamming like a Tarantino farce on crack, with plenty of blood and laughter.

Two hitmen have captured a man in a motel room who has just been released from a twenty-year jail sentence. The problem is… neither the man or his captors have any idea why they are all there. What crime did he commit? Why is the man so clueless through the interrogation? The only thing to do is wait till The Boss arrives.

WARNING: There will be loud gunshots fired during the performance. Also dangerous weapons. And a little smoke. There’s also profanity. And… well. Viewer discretion advised is all we’re sayin’

Follow us to get more clues and behind-the-scenes scoop

the receptionist & colin, too