"The Mermaid Who Learned How to Fly" 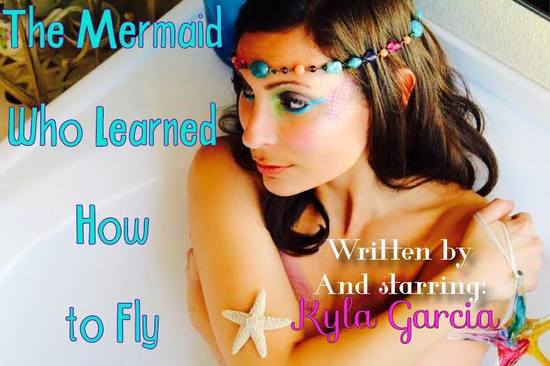 What the critics are saying:

“She used her body, her voice, and just one scarf to make this one hour show interesting. Her story will stay with me for quite some time.” – Enci Box of Bitter Lemons

“Garcia’s storytelling ability is the stuff of legends.” – Bob Leggett (The Examiner)

“The biggest and loveliest surprise at Fringe this year.” – Tracey Paleo (Gia On the Move)

“Delightful. Funny. Heartwarming. Kyla’s positive energy is infectious.” – Ruthy Otero (Creator of The ABC’s of a One Person Show", Variety “Comic to Watch”)

What Audiences are saying:

“Yes, yes, yes. Best show I’ve seen at the Fringe so far. Check this out. Everything a great solo performance should be.” – Ben Moroski, Winner Best in Solo Performance at the 2014 Hollywood Fringe Festival writer/star of “The Wake”

“You are hard pressed to find a better solo performance at this years Hollywood Fringe.” – Award-winning star/composer/lyricist Michael Shaw Fisher of “The Werewolves of Hollywood Blvd.”

“We go to the theatre to be told great stories, to be taken on a journey, and to see magic happen right before our eyes. Kyla Garcia blows the audience away with her ability to fulfill not only those desires, but takes you on a ride (or flight) you’ll be thinking about for days.” – Casey Gates (award-winning solo artist of “The Yogamerican Dream”)

“Kyla Garcia’s exuberence and energy palpably fill the space in this one woman show about a young woman coming of age in love.” – Steve Madar, company member/producer The Vagrancy

“Mermaids can’t decide which world they belong in.
Their tails tell them to swim far and deep.
Their upper body tells them to reach for the sun.
It’s like being in love with two people at once.
Both bring out different worlds within you.
And you may experience happiness with one, but long for the other.
The way we miss sunshine in the rain.” –
Victoria in “The Mermaid Who Learned How to Fly”

Victoria is a writer. Victoria is an overachiever. Victoria has big dreams that no man or woman could EVER distract her from. UNTIL…she falls in love with a woman. While still in love with a man. Caught between two lovers like a mermaid torn between the land and the sea, Victoria’s journey will take you into the depths of forgetting who you are and the heights of remembering.