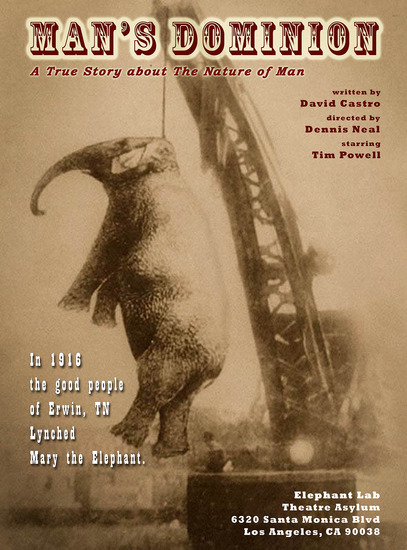 There are some lost stories in American history that need to be found because they resonate down through the ages. They resonate in such large American and universal themes as man’s cruelty to animals, man’s capacity for religious intolerance, and the pervasiveness of age-old racial attitudes from the lesser angels of our nature. MAN’S DOMINION, a history in 10 characters done as a one-person show examines one such ‘lost’ event in American history. In September 1916 the good people of Erwin, Tennessee lynched an elephant. Mary, an 18-year old elephant and star circus attraction who had only known life in captivity had thrown, stomped and killed her trainer, Red Eldridge, on his second day of work. For this, Mary was sentenced to death and the giant railroad cranes in the Blue Ridge mountain rail hub of Erwin were to be the engines of her demise. MAN’S DOMINION provides voice to ten (10) witnesses and participants to that event, including both victims – Red Eldridge and Mary, the elephant – along with clowns, ringmasters, circus roustabouts, the local minister, a local hunter, and others. It is our sincere hope that seeing, hearing and experiencing MAN’S DOMINION will give food and fuel to the better angels of our nature.