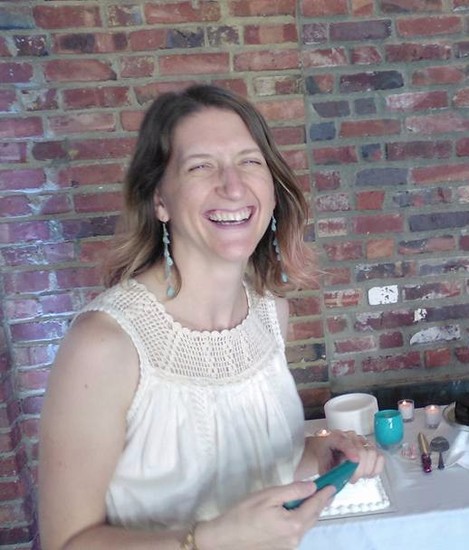 Congrats to Stina as she takes on the additional role of Front of House Director!

My husband, Brendan, and I moved to L.A. in the fall of 2010 to pursue our dreams of acting and writing, respectively. We first heard of Fringe midway through June the following year. We were dead broke, like so many Los Angeles transplants following their dreams, and I remember thinking, “Hey, I should see if they have any volunteer positions, maybe I could see some shows for free that way.”

June passed and I never got around to it, but I vowed I wouldn’t miss Fringe in 2012. I signed up to volunteer the following spring, and the first volunteer job I did (and roped Brendan into joining me for) was dressing up as a Fringe Freak and marching in the West Hollywood Pride Parade. We had so much fun and realized we’d found an amazing community. I volunteered several more times that Fringe and, yes, I got to see some shows for free.

2013 marked another year of volunteering for Fringe and seeing shows, but with a bit of a shift. Brendan and I wanted to be even more enmeshed in this community and to dust off our producing hats, still crumpled in the moving boxes we brought from Seattle. We decided we would write and produce a show for Fringe 2014.

Our show plans were well underway as 2014 rolled around and then there was a little wrinkle: I saw that Fringe was seeking a new volunteer coordinator; the ever delightful Liz Steele was moving on. I was worried about a conflict of interests, but I couldn’t pass up this opportunity to become thoroughly entangled in Fringe and help more lucky folks get involved as volunteers. I applied, I interviewed, I expressed my concerns about also producing a show and assured Ben that Brendan would be the primary show promoter, and I got the job!

As Volunteer Coordinator, then Director, I’ve watched the ranks of volunteers expand to nearly 250 dedicated folks, overseen the Volunteer Comps and Discounts program, initiated and led annual Volunteer Orientations, and overseen and grown the Fringe Intern (Fringetern, anyone?) Program. This year my role will expand as I take on the role of Fringe Central Front of House Director. In addition to scheduling volunteers to help out at Fringe Central, I’ll be hiring Concierge and Security staff, maintaining communication between departments (Bryan’s Bar, Concierge, Cabaret, and Security), and making sure Fringe Central is well-staffed, well-stocked, and running smoothly.

I’m as caught up in this web as I could ever have hoped, and I wouldn’t have it any other way. Moving to Los Angeles from cozy Seattle has made me realize that it isn’t always easy to find amazing communities of trustworthy, dedicated, and inspiring people. When you are lucky enough to find one, get enmeshed and entangled and caught up in it.