The Women of Tu-Na House 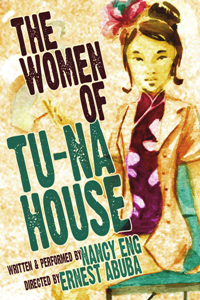 After some much needed foreplay and a rave review at the 15th Annual New York Int’l Fringe Festival, (www.hyreviews.com/fringenyc2011-reviews.htm#tu-na.) last August, the chance for East to meet West arrived when NYC’s The Women of Tu-Na House opened for business on the FringeCentral Mainstage for three performances.

Now West Coast audiences get four more chances at a happy ending when The Women of Tu-Na House re-opens for business during an extended run at Asylum Lab.

What matters most – the size of the boat, motion of the ocean or Jeremy Lin?  Discover for yourself when you step through the doors of Tu-Na House, an infamous Asian massage parlor located steps from the U.N., in NYC where you’ll meet the women who work there and offered a rare glimpse into a surprising, comedic & sometimes sad world usually seen through almond-eyes in this entertaining & funny 1hr-show performed and written by veteran NYC actress Nancy Eng..

Through a succession of distinct, disparate characters, hailing from various regions, you’ll hear how the women, victims by no means, choose to offer additional services or ply their trade in “the world’s profession” voluntarily, feeling no remorse or shame for the paths they’ve paved and the roads they’ve chosen to travel.

Get your happy ending while supplies last!