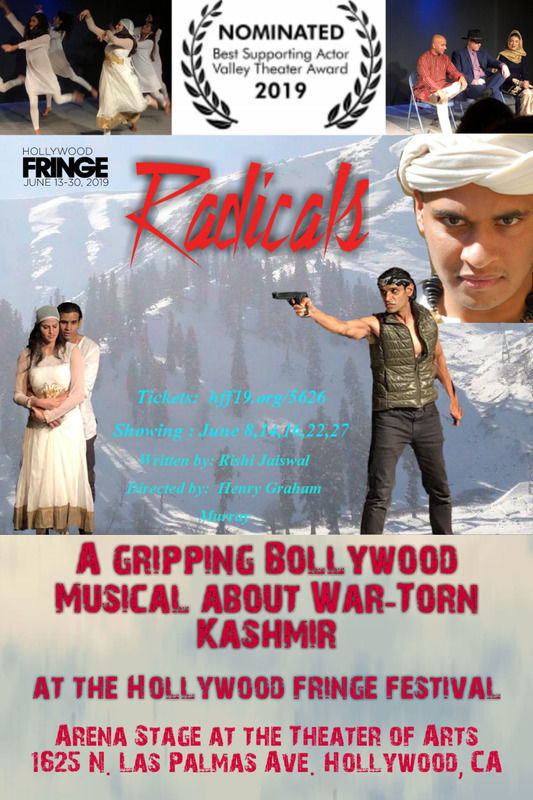 A gripping Bollywood Musical about a love story struggling to survive in the war-torn valleys of Kashmir. Through action, dialogue and dance, Radicals tackles Islamophobia and the trauma of warfare on innocent lives.

*Some action scenes with violence

Aamir Shah, a patriot of his beloved land Kashmir is radicalized by the renown terrorist Intemam-Al-Haq when his brother is murdered at his own wedding, by US Military Forces trying to ambush Intemam. They end up killing several innocent civilians, most of them Aamir’s family and friends. He is forced to leave the love of his life Naia, as he vows revenge against Major Steve Campbell, the one responsible for the operation. Intemam persuades Aamir to return to Naia some years later when she has become a television journalist, and use her love for him to infiltrate the News station and bring about its destruction. Meanwhile, Major Campbell, consumed with guilt upon returning home, takes his own life right before his son Sonny Cambell. Sonny is scarred deeply and is radicalized in his own way against those he feels are responsible. True conflict begins when these two seemingly different soldiers, Aamir and Sonny, come face to face with each other and have to confront the reality that they are but mirror images of one another. Will either of them survive their thirst for revenge? Find out in Radicals, a Valley Theater Award Nominated Show at the Hollywood Fringe Festival this year.