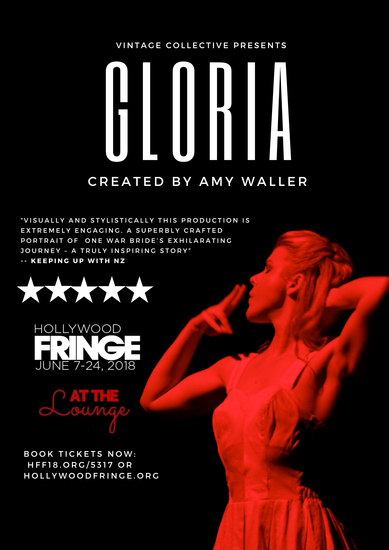 Soon after New Zealand had farewelled 20,000 brothers, sons, and husbands to foreign fields in WW2, the arrival of 45 000 handsome and charming young American servicemen became much needed escapism out of the fear and deprivation of war.

Based on a true story, GLORIA follows the heartache, secrets, and bravery of NZ war-bride; Gloria Schmidt, whose marriage to an American serviceman made waves in New Zealand when she stood against the tide regardless of social disapproval.

GLORIA is the story of a woman facing adversity, struggling to find herself in exceptional circumstances.

A fascinating and fearless one woman show that leaps into flickering war-time romances, swing time dance halls and sons lost to foreign fields.

“Amy Waller does an amazing job as solo performer, holding a very slick 60 minutes together with panache and style” — THEATREVIEW