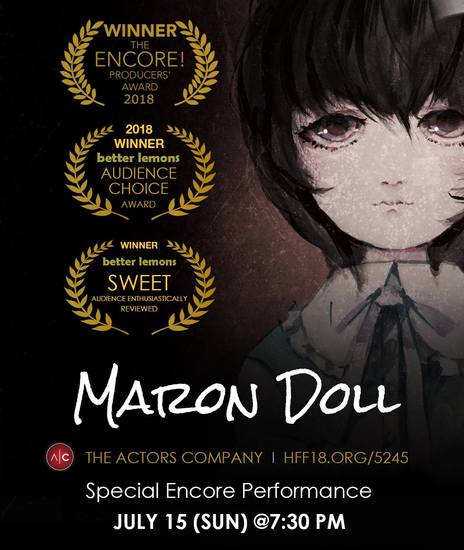 One night, after 30 years apart, a daughter returns to her lonely mother. With a bitter history between them, the two struggle to mend their broken bond ridden in a tragic circumstance. “Maron Doll” explores a difficult relationship and how we can rebuild bridges we thought were long-since burned.

“Maron Doll” is channeled through the deep emotional performances of; Lara Helena, a co-creator, co-writer, actress & producer of 4 Shorts in 4 Days in 2015, (The Long Run, Dispensable Girls, Time Traveler & Sting of the Scorpion), and a web-series, “The Global Hollywood Show”; and Shelly West, a writer, and actress featured in a short film called the “Tuesday Morning.”

The play was written by director and writer, Soo Chyun, who received critical acclaim for “Son of Man” The musical. This musical was performed at the Downey Civic Theatre with an audience of nearly a thousand and also broadcasted live on YouTube worldwide to the audiences from America, Thailand, Australia, and Korea.

Soo Chyun’s 8th production, “Maron Doll” was originally introduced as a 25-minute Korean short story in an anthology known as “The Door,” now featuring as its own localized full-length one-act play. “Maron Doll” made its return to the NOHO Art District in February 2018 and received heartfelt reviews from those who were deeply touched by the story of a mother and daughter’s struggles through abandonment, failure, poverty, and Alzheimer’s disease.

“Maron Doll is very much hitting all the right notes and pulling quite a few heartstrings.”
- Tracey Paleo, Chief Editor at Gia On The Move

“A masterpiece of the mother-daughter relationship.”
- Geetika Budhiraja, Director/Writer/Actress, Naked

“The last moment of the play will remain in your heart long after the curtain call.”
- Miho Ando, Actress, Robert Allan Ackerman’s BLOOD

“Wow, wow! The story took me to places I had not thought about..”
- Mateja Harrington, Better-Lemmons Reviewer

“..really hope this show gets the notoriety it deserves”
- Claus Glaesner, CEO at HTP

“will have you scratching your head till you realized what’s transpired in front of your eyes”
- Victor Sotomayor, Writer/Director, The Oz Monologues

“It’s a MUST see!”
- Alessia Franchin, Actress, The Dust of Time

“The performances are raw, emotional, convincing and powerful. I loved it.”
- Morten Bay Ph.D., Writer

“I was in tears throughout this impactful reunion.”
- Katt Balsan, Actress/Writer, Balls’ ON

“And that ending!!!! OMG, it was harrowing and I was in literally tears.”
- Peerada Meemalayath, Actress/Activist/Director, TRAFFICKED 2.0

“..the story succeeded at taking us on an emotional rollercoaster..”
- Tiwana Floyd, Actress, CBS’ NCIS

“Heartfelt and honest.”
- Jonathan Tipton Meyers, Actor, We are Traffic

Broadway World’s Coverage of the show.