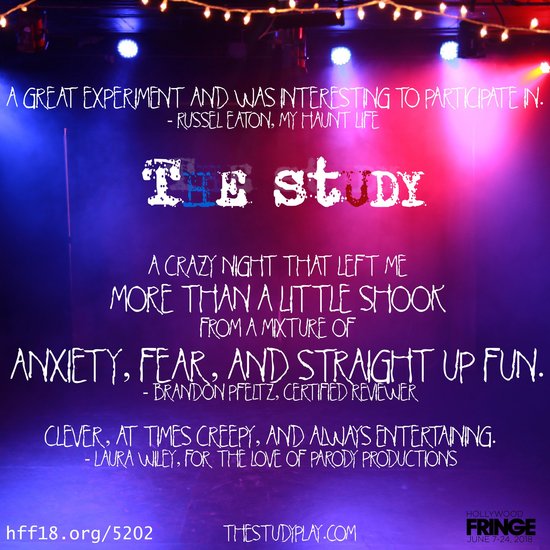 We’re listed as Immersive bu only because there is no “INTERACTIVE” option!

THE STUDY takes place during a psychological clinical test of the flight-or-fight response set in a college lecture hall. The audience’s reactions and answers determine the outcome of each performance; in this immersive, audience-interactive, video game and theatre-inspired piece. Created by Jared Tyrel Pixler and David Evan Stolworthy, the creators of THE VIDEO GAMES, which ran for nearly three years. THE STUDY has a cast of eleven characters, many of which are from the worlds of the creator’s premiere plays; Let Me Out and Roommates. No show will be like the last in this scripted, choose-your-own adventure style play.

Can the audience make it so everyone escapes alive?

THE STUDY is directed by Jared Tyrel Pixler and David Evan Stolworthy, fight choreography by: Matt Franta and Brandon Pugmire and special effects make up design by: Katie Lynn Mapel.

This performance includes the use of special effects including:
Stage fog, blood effects, flashing lights, loud noises, smells and is intended to scare you. Those attending do so at their own risk.

A signed waiver will be required to attend this performance. May contain triggers; violence, blood, gore and simulated sexual situations.

*The Flight Theatre is located upstairs and is not ADA accessible.