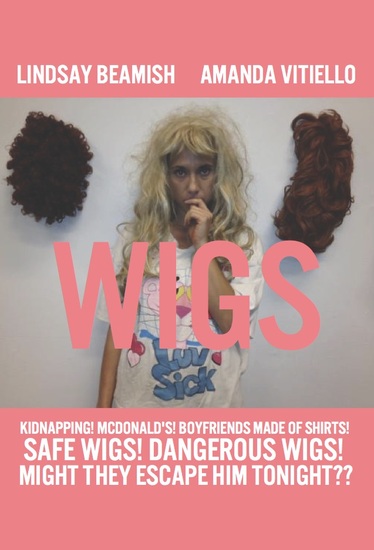 Two preteen girls locked in a room for years have invented coded languages and ritualistic acts to survive, appease their captor, and orchestrate their escape. Might they escape him tonight?? Lindsay and Amanda play our heroines: Ruthie Featherstone and Jenny Parker! Lindsay and Amanda also play The Man who stole them in the first place!

Wait for the secret signal, and then take down and twist the sheet!
Then you pull it as tight as you can! Then you grab the keys from his pants!
Then you GO HOME FROM WHERE YOU CAME!

“Wigs is proof that actor-driven devised work can yield superb results. It is focused and totally absorbing…. Beamish and Vitiello are completely convincing in their difficult roles; it’s hard to imagine there are better performances being given in the Fringe this year.”
– Regina Robbins at Theater is Easy

“For fellow theatre-makers, the parallels between the piece itself and the act of creating it are impossible to ignore, and raise tantalizing questions; for astute civilians, there is also plenty to reflect on in the spectacle of two vulnerable women, barely dressed, performing a series of female archetypes (or stereotypes) ostensibly for their captor, but in reality, for us. At the Fringe, the busiest, most madcap shows tend to hog the attention, but like the room in which its characters are trapped, Wigs’ modest scale shouldn’t be allowed to obscure the fact that it contains its own intricate world”
– Theasy.com

“Wigs is full of honesty and insight regarding the complicated dynamics of a forced bond between two women, and the coping mechanisms these characters rely on to make it through the night that lasts forever.”
– Weirdsister.com