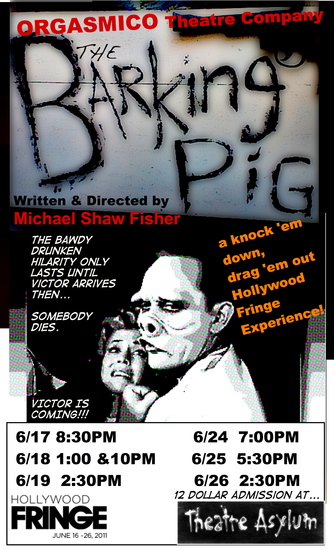 “There’s betrayal, loss, beatings, theft, prison, music, the loss of small town America, and a beauty pageant. It’s all just so lovely and sad and complicated and, most of all, hilarious. The audience did not stop laughing and it wasn’t from the whiskey, either.”
- Ceebs Bailey, LA Splash

“The Barking Pig is dark comedy at its best.”
-Nataly Chavez, Campus Circle

“There was even one hilarious moment which shocked me and had me laughing quite hard behind a hand clapped to my mouth.”
- Kora Kaos

Victor is coming to the Barking Pig to kill one of the tavern’s seven patrons.
Who will it be? What is his motive? Is there anything this band of outrageous drunken nincompoops can do to escape the infamous Victor’s wrath?

Sit back and watch the pandemonium unfold in the Thearico Orgasmico’s World Premiere of THE BARKING PIG (written by Michael Shaw Fisher and starring Asher Lyons) which is sure to be one of the most bawdy, dastardly, and certifiably original theatrical productions at this year’s Hollywood Fringe Festival. Bring a date, a friend, or a pretentious colleague you’d like to see squirm. Laugh ’til you cry or cry ’til you laugh…but beware…