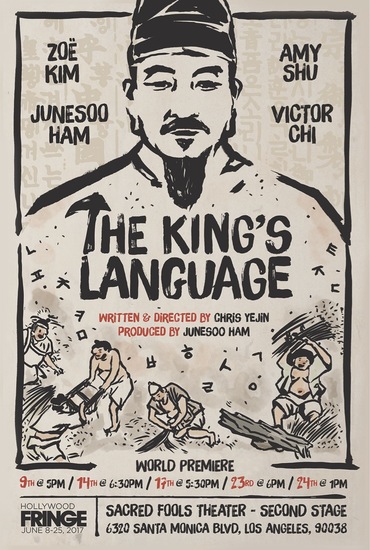 THE ONLY ASIAN ENSEMBLE SHOW OF FRINGE
Encore Award Winner! See dates for performances below

“..packs an astonishing emotional and intellectual punch through a magical blend of historical reenactment, social theory, comedy, and traditional costumes and music. This is the kind of visionary theater that we need looking forward on the scene in Los Angeles as well as nationally and trans-pacifically.”
Sunyoung Park, Associate Professor of Korean Literature and Culture at the University of Southern California

“Chris Yejin and her talented troupe have produced an engrossing rendering of the story… with humor, wit, and a performative intensity that made for a moving and rousing theatrical experience.”
Massimo Grassia

In a blend of contemporary and folk theater, The King’s Language whimsically retells a historical milestone of a nation’s identity as a people through rhythmic beats of a native drum punctuated with dialogue, song and movement. This Korean musicality performed mostly in English playfully traverses culture to incite awareness in audiences of a fundamental human tool we often take for granted—casting a spotlight on what we risk as a species if it is eroded.