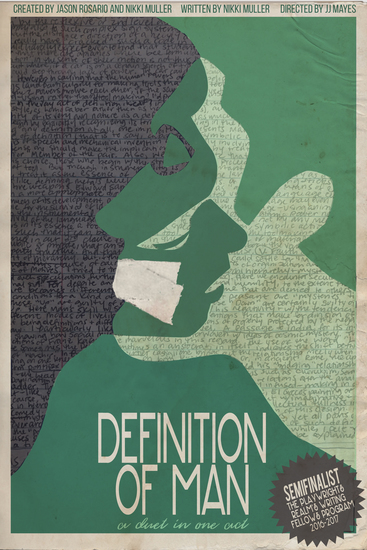 PRAISE for Definition of Man:

“That was authentic, refreshing, and internally SUPER uncomfortable—I loved it. Someone wise once told me that I shouldn’t bother with art that doesn’t transform your life in some way. Thanks for being a part of the transformation.”

“Nikki Muller and Jason Rosario put on a beautiful display of theater. Their production Definition of Man was genuine, transparent and raw. A rollercoaster of emotion. These two are beyond talented and I wish I had the words to truly express how hard their piece struck me. In one hour I was able to look inward and really evaluate myself as a person in a way that I thought didn’t exist beyond my mind.”

“I’m still looking for the words.  It was intense. It was dramatic. It was intimate and vulnerable but none of those words come close to describing what you created.  I need new words.  There is a secret self that we never talk about, not even to ourselves. It cannot die but it’s afraid to live.  Afraid of it’s power, afraid of how we could destroy those we love. Afraid that the very speaking of it will destroy the little joy we have manage to construct out of the safe world we have decided to expose to others. You have managed to touch that spirit.  We communicate with words and bodies but rarely do we communicate our immortal indomitable soul.”

A sexier, more violent Waiting for Godot, “Definition of Man” is a post-modern decreation myth that, drawing from Kenneth Burke’s essay of the same name, investigates the human drive to communicate and the inevitable breakdown that results from the inherent incompleteness of language. This one-act organically grew through a workshop that synthesized personal narratives with academic texts to explore issues of identity, race, gender performance and communicative breakdown.
(“Definition of Man” advanced Muller to one of 24 semi-finalists out of 374 submissions in The Playwrights Realm’s 2016-2017 Writing Fellows Program). In the abstracted setting of a burnt-out, post-apocalyptic ruin, the cast of two serves as a stand-in for all of humanity while grappling with their own personal struggles to maintain a sense of self in a world that has ceased to exist. In a tightly-paced narrative progression, they move and shift between verbal and physical intimacy, exploring how these intersect and overlap from start to finish. Both abstract and specific, the piece shifts between poetic-expressive language and colloquial speech, and offers a unique opportunity to see texts often preserved in intellectual amber torn from their pages and infused with physicality and meaning, marrying traditional intellectualism with organic.

The play shifts from high-level intellectual discourse to abstracted speech to casual conversation, demonstrating the full range of possibilities and impossibilities we encounter as “the symbol-using animal.” Over the course of the play, language is slowly stripped away from the two, and all they are left with is the quiet, potent language of the body to speak through.

Most importantly, the piece seeks to touch the timeless by speaking “from somewhere.” In the tradition of postcolonial epistemologies, we recognize that we cannot speak for everyone but only ourselves, and that by representing where we speak from, we allow the audience a window into our lived experiences, differences and similarities. XX and XY struggle over their disparities, but ultimately discover that they are moving towards the same goal. In this age of intolerance and tension, this piece holds a message of hope and healing at its core. The co-creators’ exploration of their shifting identities as a Hispanic American and daughter of an East German refugee respectively resonate especially in the current national and international climate. It is our hope that the audience, finding an avenue into the play through either of these characters, will be able to turn a critical eye toward their own lives and question their own assumptions about how they communicate and make sense of the world.

**Warning: this show contains a scene of violence that may be disturbing to certain people. Please take note.