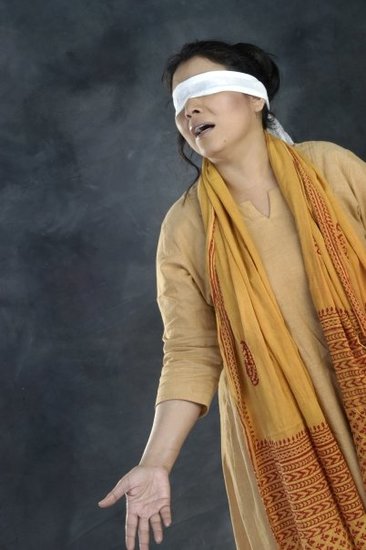 She blindfolded herself not out of devotion for her husband but as a protest to arbitrary male power and dynasty politics. It was not Gandhari who chose to block sunlight out of her life; it was us who turned a blind eye and deaf ear to a woman’s pain, a wife’s pleas and a mother’s cries.

She was born a princess, but was forced to marry a blind man, Dhritarashtra, who was much older to her. She was blessed with a boon but who knew that would become a disastrous bane for Gandhari, the most tragic character in Indian epic Mahabharata.

In this 60-minute solo act performance, Well known Indian-Australian actress Aishveryaa Nidhi promises to read unread chapters of a woman’s life who embraced darkness with open arms. Premiered at Sydney’s most respected venue, National Institute of Dramatic Arts, Australia, the play Gandhari-In Search of Light helps us search and find a woman hidden beneath glorious tales of heroes and wars. Produced by Abhinay School of Performing Arts Inc., Australia and directed by eminent theatre director Arvind Gaur from India. Gandhari speaks her heart out for the first time. She assumes centre-stage and tells Mahabharata from her perspective- a perspective which is unheard of. This thought-provoking production garnered appreciation and opened to rave reviews when performed in Australia and India.