WHO ARE YOU ANYWAY? 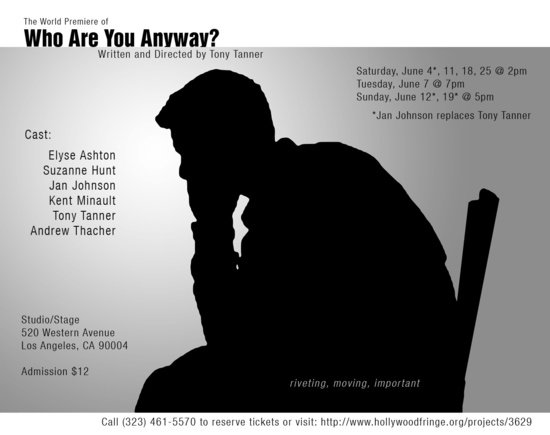 BROADWAY VETERAN TONY TANNER EXPLORES THE HARSH REALITIES OF ALZHEIMER’S DISEASE IN THE WORLD PREMIERE OF “WHO ARE YOU ANYWAY?” Set in a Sanatorium, this play centers around a man suffering from a form of Alzheimer’s disease. Though he is often vital and combative he does not remember his past life, nor the people in it, though they visit him daily. He is also subject to ‘cabbage patch’ episodes when no communication is possible. In the course of the play, his wife and daughter resign themselves to an inevitable withdrawal from him and a move towards creating new lives for themselves, with other men. Then, seismic events occur that demand new decisions from everyone concerned. RIVETING, DARKLY FUNNY, HAUNTING, HEARTBREAKING, IMPORTANT!
DIRECTED BY: Tony Tanner
CAST: Elyse Ashton, Suzanne Hunt, Jan Johnson, Kent Minault, Tony Tanner, Andrew Thacher