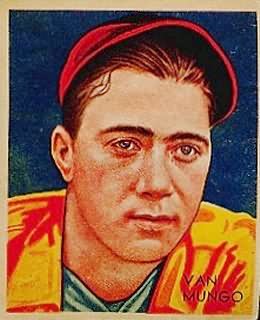 ALL of the remaining performances for MUNGO! are Sold Out! (whew!) Thank you everyone for your enthusiastic response!

IF YOU HAVE YOUR TICKETS : Please be at the theater at least 30 minutes before curtain. Fringe shows must start exactly on time! Late seating is an option for our show but we don’t want you to miss a minute of Van’s Birthday! Parking can be is a challenge, so consider taking Lyft or Uber for easier access to The Complex. Thanks! And now a message from Van…

He was a man who once boxed with Ernest Hemingway, struck out Babe Ruth and created an international incident when one of his numerous nighttime “amours” came fully equipped with a jealous husband and a squadron of rifle-wielding Cuban Federales.

He threw as hard as Dizzy Dean and drank even harder than that…cutting a wide, colorful swath through the barrooms, boudoirs and baseball diamonds of the 1930s.

He played for a series of terrible Brooklyn Dodgers baseball teams of whom it was famously said “couldn’t hit water if they fell out of a boat” and were fondly known as “dem Bums” when they weren’t being called even more colorful names, sometimes by the man himself…who came into this world with the melodious name of Van Lingle Mungo.

Van’s been gone for a while now. But he returns every year on his birthday to Goob’s Bar & Grill in his home town of Pageland, South Carolina to visit with you good folks, tell a few stories—many of them true—to set the record straight about this and that and try to figure out what it all meant. You see…it wasn’t all booze, brawls and women. There was love, too. And regret. A lot of regret.

But why don’t y’all come down to Goob’s and see for yourself in “Mungo!,” a one-man show about the life and times of a world-class character and semi-great pitcher. If it were up to Van, he would remove the “semi.” But then he always did tend to stretch the truth a little.