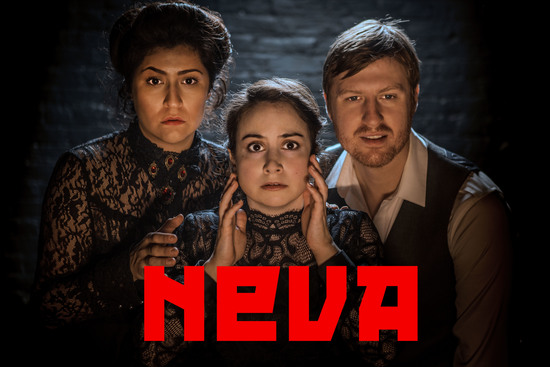 In a dimly lit rehearsal room in St. Petersburg during the winter of 1905, Anton Chekhov’s widow, the actress Olga Knipper, along with two other actors, await the rest of the cast and their director while unseen striking workers are being gunned down in the streets by the tsarist regime. A politically charged, haunting interrogation of theater and the revolutionary impulse, Neva savagely examines the relationship between theater and historical context in this ominous and tightly crafted ensemble work that allows a palpable terror to creep through the theater walls.

First seen by Los Angeles audiences in 2011 at REDCAT, Neva remains one of the theater’s most talked about productions with critics proclaiming, “Neva has a dreamlike power” (LA Times) and “contains the raw incendiary power of a bomb tossed into the art-loving crowd” (LA Weekly). This January, Shock Pulse brings together a team of top notch theater artists to bring this resonate drama to life once more. In the wake of recent tragedies and political unrest here in the United States, such as the San Bernardino shooting, the Black Lives Matter movement, and the People’s Climate March, this beautifully woven piece of theater is more resonant than ever as one of its characters cries out, “People are dying of hunger in the streets and you want to put on a play?”