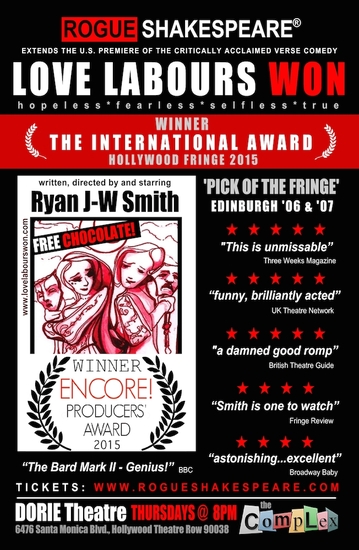 Love Labours Won is an original, comedic Shakespearean pastiche written entirely in Elizabethan-style rhyming iambic verse and one of the most acclaimed plays ever to come out of the Edinburgh Festival Fringe. It was ‘Pick of the Fringe’ two years running; garnered multiple 4 and 5 star reviews and played to packed houses.

And yes, the rumors are true – as well as an amazing show, audiences are treated to free organic chocolate! ;)

Here are just some of the show’s past reviews:

(FIVE STARS) Shakespeare’s relevance to contemporary life is often challenged by champions of modern theatre. With ‘Love Labours Won’, actor-playwright Ryan J-W Smith has written an outstanding modern play, in Shakespearean-style verse, which neatly addresses this concern and – quite frankly – blows it out of the water. …’Love Labours Won’ is undoubtedly the best Shakespearean comedy not written by Shakespeare. Relevant? This is unmissable.
- Three Weeks

(FIVE STARS) This is a performance that no UK Theatre Network visitor should miss… Smith’s attention to detail is evident in everything he does…. is there no end to this mans ability to understand and attract a theatre audience? I am very pleased to say that it lived up to my expectations and more. …some of the most delightful, well-written verse you are likely to hear. A very enjoyable, warm-hearted, brilliantly acted, funny tale of love. Go see it and watch great theatre in action.
- UK Theatre Network

(FIVE STARS) I don’t make a practice of going to see a Fringe show two years running – there is far too much to see to repeat oneself – was it worth sacrificing one of my limited number of “slots” at the 2007 Fringe? It was. It is an excellent cast who are clearly getting a lot of enjoyment out of it as well as doing a good job. And in fact is doing very good business: there are not many Fringe productions which are pulling the size of audience this is.
- British Theatre Guide

(FOUR STARS) This piece by director/writer Ryan J-W Smith garnered fantastic reviews and awards at last year’s Festival. It’s back again and I’m happy to report it’s still excellent. To describe it as a brand new Shakespeare play is to sell it short. True, Smith has done an astonishing job simply writing a play completely in rhyming iambic pentameter and making it lucid and entertaining. But it’s the fact that he makes it feel so contemporary which is the real coup. The plot is convoluted (deliberately) and is stock Shakespearean fare about star-crossed lovers and deceitful partners, and is driven by a series of soliloquies. For me it really takes off when the device of a play with in a play is introduced (think Hamlet, Midsummer Night’s Dream) and the pace really picks up. This is no silly romp, however, with serious points to make about the nature of love and deception. Will Shakespeare, who must be dizzy with spinning in his grave every year when the Festival comes along would thoroughly approve of this company’s skill and vaulting ambition.
- Broadway Baby

(FOUR STARS) Just as the bard himself is ever our contemporary, Love Labours Won addresses man’s enduring dilemma of responsible monogamy versus free-spirited debauchery. “Can faithlessness in man be called a crime?” asks one of our protagonists, and as he unpicks his quandary we see some of the Globe’s finest traditions replayed: strong, resourceful women, hoodwinked noblemen, gender- bending tomfoolery – this play has them all. Smith, in daring “to chase the canon of the bard” shows himself as master of the iambic pentameter and rhyming prose. He cleverly matches Shakespeare at his own game with an engaging script that is faithful to its 16th-century muse but takes a dash of today’s vernacular.
- Hairline

(FOUR STARS) I am not, and never will be, a fan of William Shakespeare or his work, and I know this makes me somewhat of a philistine, but hey that’s life. The Rogue Shakespeare Company however, well that’s a different story judging by the performance of this play I witnessed. This play in the style of The Bard, written and directed by Ryan J-W Smith is to my point of view far better than anything that came out of Stratford, the text, written in rhyme that does just that is funny and informative, the action pacey and using a lot of the devices common to the genre this seven strong cast make the most of every word as the tale unfolds. The minimalistic set, just two benches are all that is there, the excellent direction and performances form the talented cast make this a show well worth attending. It is easy to see why it is so critically acclaimed last year.
- One 4 Review

(FOUR STARS) Ryan J-W Smith is often described as a “Shakespearean Verse-style playwright”. He writes in Iambic Pentameter (and more) and, his writing is astonishing. Witty, funny, dramatic in a way that makes you think he has the Old Bard’s brain in a jar and is using electricity in an illegal and shady manner. The verse is a delight and don’t go thinking he is copying the style for its own sake. Smith makes it all his own and gives it all a modern twist. This is a tale of love lost and love won, in classic style with enough irony and satire to keep you smiling and engaged. …all the ingredients of a marvellous hour of entertainment. As a writer, Smith is one to watch. As a show, you’ll thoroughly enjoy yourselves.
- Fringe Review

A lively cast of seven young actors entertained with verse and much physical comedy to match the brilliant wit of Ryan J-W Smith, who also played as the chorus in this chamber performance. The plot was pure Shakespeare – rival lovers, lust and love, break-ups and reconciliations, even a play within a play – but brought up-to-date with deft allusions and knowing references to today’s playwright’s own recent other plays: “Sweet Love Adieu” and his next production, “The Power Play”. A must for all Shakespeare-lovers.
- Art’icle Magazine