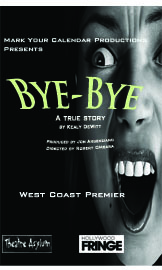 What DR. STRANGELOVE did for nuclear war BYE-BYE does for the history of mental institutions in America. This blacker-than-black farce takes you behind the scenes of one of America’s most infamous , the Philadelphia State Hospital at Byberry. Using actual transcripts and covering nearly 100 years of eye-popping history, the gruesome becomes the hilarious in this frenetic ensemble comedy with its dazzling parade of insane, inept, poignant and heroic characters. BYE-BYE leads to a stunning climax that’ll have you questioning who the crazy ones really are. West Coast premier. Five performances only!