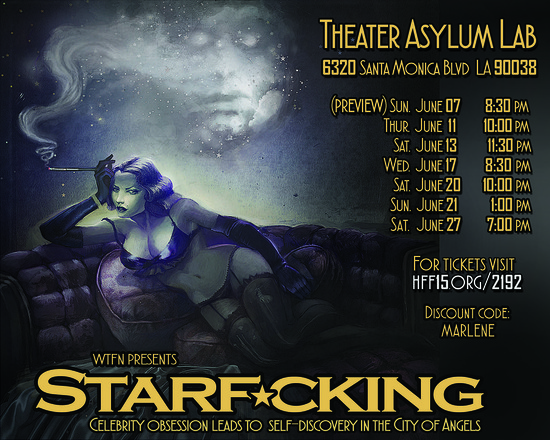 An existential peepshow into the bedrooms of Los Angeles, where star-crossed souls use star-fueled fantasies to stave off loneliness. From Marlene to Liz, from Nirvana to Zardoz — we have your starfucking needs covered.

“‘Starfucking’ works…The scenes, for all their audacity, are etched with a calm dignity, and clever writing that display a twisted appreciation of the absurdity that expresses itself in what people desire, or tell themselves they do…from the ranks of cartoon artists have emerged some unique talents: Tim Burton, Federico Fellini, and Jules Fiefier with whom Lintz seems to share a certain sensibility…Johnson’s craft is apparent in the trust he shows his cast and the material, a trust that allows him to place before his audience a piece that is not unlike a Japanese puzzle box…DeCordova, opens the piece on the perfect note of understated truthfulness…Kelly Schumann is touching…Blaine Vedros is excellent…Smith executes with stunning skill…Dawn Joyal brings a sweetness and vulnerability to the part…Yoder and Allie bring all the uncertainty these two characters share and forge it into a bittersweet conclusion.”
-Ernest Kearney, LA Bitter Lemons

“Lintz’s writing is crisp and clean and director Eric G. Johnson and his cast keep the show moving at a nice pace. There are laughs and pathos seamlessly bound together.”
-Rob Stevens, Haineshisway.com

“What a fantastic show! Usually I am hesitant to stand at the end of a performance, but I was the first one to jump out of my seat to lead the audience to a standing ovation for this one. These performances were unreal. The actors were truly Phenomenal. The play was extremely well written. The pace was perfect and the intimacy of the space made this an extraordinary evening of theater.”
-Aida Lembo

“The performances are so tight — the writing is impeccable & sooo wonderfully nuanced — & the directing? Just WOW! This is a show I would pay serious money to see at the Ahmanson or on Broadway!”
-Cyanne McClairian

“A refreshing and fun journey into a peoples’ inner lives. Heartfelt, raw, funny and tender…Lovely show, all around.”
-Regina Clark

From Sharon Lintz, author of the acclaimed comic series “Pornhounds,” called “astonishing” in The Comics Journal, “funny and wondrous” in The Onion’s A.V. Club, and named a “Notable” in Best American Comics 2012.