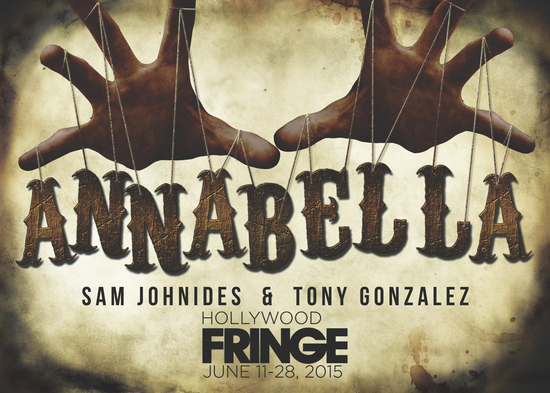 “ANNABELLA is an absolute tour-de-force.”

“Add ANNABELLA to your MUST SEE Hollywood Fringe Festival list..”

“Every level of creativity is complete and fulfilling – making each moment…filled with wonderful exhaustion.”

“The passion, intensity, and talent was undeniable… The haunting music pulls you in, entertains, and transports.”

“Gorgeous. Just gorgeous… Wonderful story, rich characters, and a songbook that will give you absolute chills.”

“ANNABELLA is a beautiful and tragic story told by some of the most talented musicians I’ve ever seen at the Fringe, or in L.A. theatre in general.”

“…vocalists are some of the strongest I’ve seen in my 5 years at the Fringe.”

Named one of the Top 5 Musicals at the Hollywood Fringe Festival by LA Music Blog!

“Somewhere between a Disney creation and Phantom of the Opera….see this one before they get money and each ticket costs a fortune…”

“Annabella” – Set in medieval Italy, this is the dark tale of a traveling puppeteer, Lorenzo, saved from death by the healing hands of Annabella, a secluded witch of the woods. Meanwhile, Valentina, kept young and beautiful by the witch’s magic, grows jealous of the love growing between them and plots to break Annabella’s heart by taking Lorenzo from her. Doubt grows between the two lovers and darkness from Lorenzo’s past resurfaces as he struggles to keep from losing Annabella.

This is the second musical written by “The Sam and Tony Show” following their first massive production of “The Last Dawn” the sequel to “Annabella”. Both growing up as classically trained musicians and crossing over into the modern era, the sound of their music is a thing of beauty. Focused on the evoking of emotion and story-telling through song and script, they have created an entire world for you to become fully immersed in. Dealing with magic, greed, romance and madness, you are bound to be enticed by their other worldly creation.