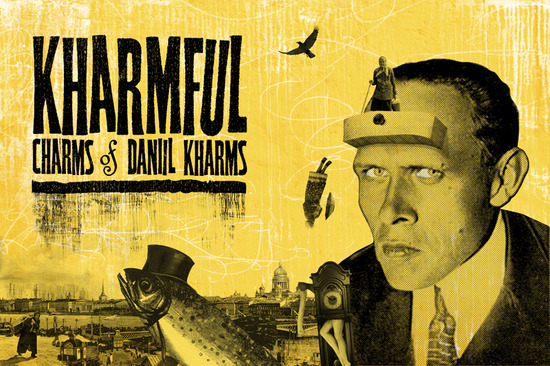 “precision ensemble and well-oiled production deliver a worthy approximation of what may be the next best thing.” Bill Raden for StageRaw

“The company members of ARTEL are beyond good: THEY ARE A BUNCH OF RAVING GENIUSES” Eric Michael Kochmer for Fringe Corner

“…you will experience something wonderfully fantastic and mystical, and you will leave the theater with a happy heart and a lightened soul” Eric Michael Kochmer for Fringe Corner

“…at once one is moved from laughing hysterically to crying. Very Russian. Very Good.” Eric Michael Kochmer

“…They perform their bewilderment stories for us with such lightness and humor, so that we could laugh at seeing the world slightly turned, to show the dimensions that we are usually afraid to face but that surround us constantly, those of Death and Unreasonable and Unthinkable… After having received our shots and pushes into the sharper perception, we get a chance, at least for the time of the play, to be in possession of Daniil Kharms’ irony and wisdom… and we feel like shedding of our old skin, for some time…” Olga Volozova HFF Reviewer

AND NOW ABOUT THE SHOW:

Ladies and gentlemen, don your moustaches, throw on your dandy garb for an evening of not-so-innocent pranks and antics, vignettes and dreamlike incidents, as the St. Petersburg eccentric Daniil Kharms meets ARTEL’s unique brand of clownpunk. KCDK is a Russian absurdist comedy at its most illogical, violent, sad and hilarious. Experience why audiences are still talking about this show 4 years later! Your moustachioed presence will be rewarded with a cup of homemade soup (moustachioed ladies shall receive two servings).

For those new to Mr. Daniil Kharms (1905-1942), a bit of info to quicken your inquisitiveness: Kharms was an early Soviet-era surrealist and absurdist poet, writer and dramatist, a post-modern artist before the term had any cultural currency. He exploded the conception of theatre as a literary representative, defining the rules of theatre not as dramatic but scenic. By the late 1920s, his anti-rational verse, nonlinear theatrical performances, and public displays of iniquitous and irrational behavior earned Kharms – who always dressed like an English dandy with a calabash pipe – the reputation of being a talented but highly eccentric “fool” or “crazy-man” in Leningrad cultural circles. Exiled briefly during the “relatively vegetarian” days of the early 1930s, ten years later he was imprisoned in the psychiatric ward of Leningrad Prison No. 1. Kharms died in his cell – most likely from starvation – in February 1942 as the Nazi blockade of Leningrad was well underway. His writings (a vast assortment of stories, miniatures, plays, poems, and pseudo-scientific/philosophical investigations) were virtually unknown until the 1970s, and not published officially in Russia until the late-1980s period of “glasnost”.