SCAR FACE: THE MUSICAL (An Unauthorized Workshop By The RSC) 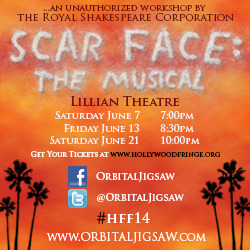 British theatre is dying. Theatre in general is dying. Nobody’s showing up to see Shakespeare. Chekov is just that dude from Star Trek and Broadway is overrun with musical versions of Hollywood movies. What is the Royal Shakespeare Corporation to do but join in the reboot musical boom. Writer Jonathan Pinter Sorkin has convinced Britain’s most lauded theatrical producer Andrew Lloyd Mendes that SCAR FACE: THE MUSICAL will bring the people back to the theatre. Now, acclaimed director Felicity Bigelow must workshop the play to see if this is a theatrical bowel movement- or will SCAR FACE: THE MUSICAL be the savior of modern British theatre?