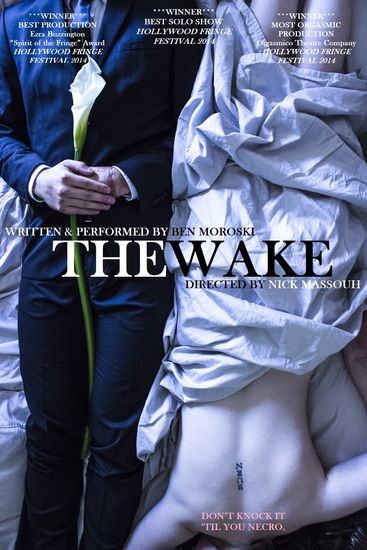 Stage Raw says RECOMMENDED!
PICK OF THE WEEK and OUR TOP TEN! by Stage Raw

ONE OF THE “SEVEN SHOWS TO SEE AT HOLLYWOOD FRINGE FESTIVAL 2014” ~ L.A. Weekly

ONE OF THE “SEVEN MOST ANTICIPATED 2014 HOLLYWOOD FRINGE SHOWS.” ~ Cinesnatch

From the creator of the acclaimed, award-winning Hollywood Fringe 2012 hit, “This Vicious Minute.”

Love and loss nearly always intertwine, but never as closely as when your new flame is a dead body.

Pete’s girlfriend dumped him two months ago. He still can’t figure out how to move on without her, until a chance encounter at a late-night party puts him on a collision course with love like he’s never known it before.

A candid dark comedy about learning which things (and people) to bury, “The Wake” is the brand new solo show from acclaimed writer/performer Ben Moroski, the creator of the award-winning Hollywood Fringe hit “The Vicious Minute,” which chronicled his battled with self-injury.

WHAT THE PRESS IS SAYING ABOUT “THE WAKE”:
“Raw and riveting…It’s rare to see such vulnerability portrayed by a male artist in so unguarded and accomplished a way. It’s a coup.” ~ L.A. Weekly

“An event…Moroski’s performance is electric, aided by his own clever, funny, acidic script…he can mesmerize.”
~ StageScene L.A.

“Moroski is a force to behold…you will be mesmerized and strangely refreshed by this play…it is okay to believe the hype, because it is true. You don’t want to miss this show.”
~ Examiner.com

“A de facto force to be reckoned with…incredibly shocking…
This IS the show you absolutely cannot miss!”
~ Gia on the Move

“He’s got an incredible accessibility as performer, a naked honesty that’s not threatening or confrontational, even when it’s in your face” ~ Backstage West

“[His] intensity enlivened all my senses” ~ Gia On The Move