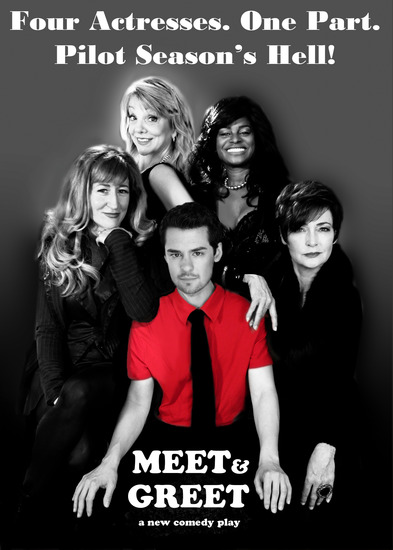 4 actresses (of a certain age) are all up for the same part in a new sitcom pilot. At the network casting office, old rivalries come to the surface, egos clash, and a shocking revelation forces them to question their entire existences.

“Highlighted with brilliant acting, writing and directing MEET AND GREET is bound to be one of the biggest hits at this year’s Fringe. The four actresses (Carolyn Hennesy, Vicki Lewis, Teresa Ganzel, and Daniele Gaither) are all fabulous, generating laughs galore from the brilliant script by Stan Zimmerman (who also directs), and Christian McLaughlin. The audience roared.” – Shari Barrett

“Stars light up the Theatre Asylum stage at this year’s Hollywood Fringe festival as a quartet of fictional Broadway/Hollywood divas vie for a sitcom pilot lead in Stan Zimmerman and Christian McLaughlin’s outrageously funny Meet & Greet. Hennesy makes for grand and glamorous Margo, Lewis couldn’t be more wonderfully wacky as Belinda, Ganzel reprises the ditzy blonde she perfected opposite Johnny Carson in the 1980s, and Gaither vanishes quite breathtakingly into Desiree’s NeNe Leakes-like skin.

“This is a ribald comic farce, compliments of director/co-writer/producer Stan Zimmerman and co-writer/producer Christian McLaughlin. Each actress is excellent and truly unique in her own right. The packed audience was cracking up at this hilarious production from the get-go.”

“Stan Zimmerman and Christian McLaughlin’s play is packed with nasty laughs and knowing industry jabs, and it all works wonderfully well, as delivered by a game and capable cast. Hennessy, a familiar face to fans of True Blood, is a riot as the imperious Margo. Ganzel sends up her own ‘80s goofy blonde image to a tee, and Lewis is all exposed nerves as the down-on-her-luck Belinda. Gaither does a wonderfully vicious parody of those awful “real housewives”.

Zimmerman’s direction is fast and furious, ideal for a piece like this, and the one-liners just keep flying. No subject is safe — social media, Netflix series, reality television, the challenges of growing old in Hollywood and the general vapidity of the industry itself.” – Kurt Gardner

GIA ON THE MOVE

“This perfectly written script endowed with an all-star female cast and cute little “devil” of a casting assistant, Meet & Greet is proof positive that comedy can be dryly hilarious and insanely over the top with no danger to the experience. There is no doubt that this show is one of the most deserving of attention at the Hollywood Fringe this year.

Writers Stan Zimmerman (The Golden Girls, Roseanne, The Gilmore Girls and The Brady Bunch) and Christian McLaughlin (Married with Children, Desperate Housewives) took the season to a new level of distinction with this offering harnessing the power of experience, good taste, timing and bullet-proof talent. It was a stunning performance!” – Tracey Paleo

as the "casting assistant"