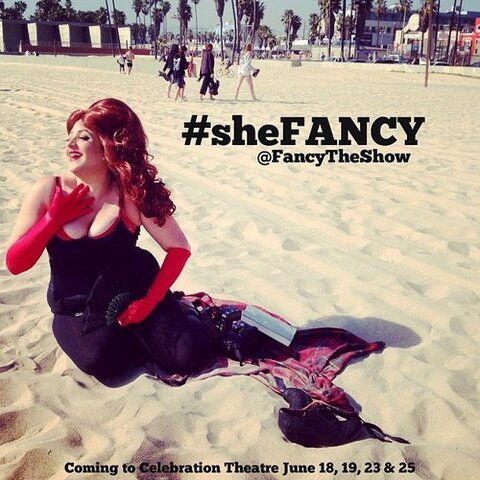 FANCY! WINS A BEST OF EXTENSION, THE VIRGIN AWARD, AND NOMINATED FOR BEST SOLO SHOW!

Catch your girl Fancy Jean Baker at the Lounge Theatre on the following dates:

“Chris Farah is simply amazing. She made you believe in Fancy, with her perfect comedic timing, her eye-popping cleavage, and her sassy wit.” Bob Leggett – The Examiner

““Fancy!” has got a spirited and, yes, feminist core that isn’t afraid to stick it to the South’s religious right. With strength, ease and abundant grace, Ms. Farah has created a memorable character anyone would be happy to take home to their trailer park”. Jennie Webb – Bitter Lemons

“Besides being a great comedienne and singer, Chris Farah. Knows how to own a f*ckin’ room.” Brendan Hunt

Fancy! A Southern Gothic Camp Parable is the hilarious and absurd one lady show based upon the song “Fancy” by Bobbie Gentry and made famous by Reba MacEntire. Fancy is a poor country girl from the outskirts of New Orleans, who learns the ways to please a man by her Mama and goes on to become one of the most famous prostitutes of the age. Along the way she befriends sassy landlady Ruby, stars in her own Parisian show, and exposes hypocritical, self-righteous, and intolerant folk while coming to the truth that we should love and respect one another as we do ourselves.

Chris Farah is an actress/improviser/writer and has performed at Upright Citizen’s Brigade LA and NYC, in Perezprov, There’s No Crying in Improv, Girls Gone Blue, The Quick & Funny Musicals, Sketch Cram, The Dirtiest Sketch Show in LA, her own musicals Lil’ Tw*t of Horrors and Oh Well! Oh Well! and many, many more. She also has had the honor of working with Cornerstone Theatre Company for Making Paradise: The West Hollywood Musical and Celebration Theatre in their musical improv show GLAADLIBS.
You can also see her as Titi’s sister Kiki on E!’s Burning Love, as Buffy Stallion in the cult improv tele-novela web-series Stallions de Amor, and a handful of Hallmark Movie of the Weeks.