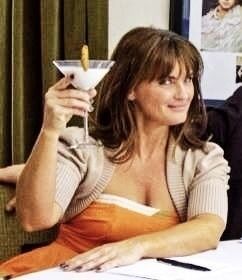 What some great comedic minds have said about Mary Birdsong:
”Very funny…”
— David Letterman
“She’s like, a genius or something.”
— Marc Maron
“She’s probably the most talented person I’ve ever worked with.”
— Artie Lange
“Mary Birdsong is the ‘me’ of comedy.”
— Meryl Streep (JK)

She is mostly known for her work as Dep. Kimball on Reno 911, as a Daily Show correspondent, and holding her own with comedy legend Martin Short in the Broadway Musical "Martin Short: Fame Becomes Me,” for which she won a Theatre World Award for Outstanding Broadway Debut. She can be seen currently in the HBO series “Succession” (produced by Adam McKay and Will Ferrell) in the recurring role of Meredith (Cousin Nick’s mom).