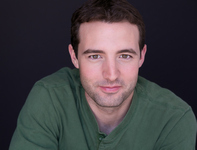 Alex Fthenakis (New Play Development) After graduating from Pepperdine in 2008 Alex trained as an actor at the RSAMD (now the Royal Conservatoire of Scotland). He is a Glasgow-based producer and performer whose work focuses on international co-productions in new writing and classics. Together, Alex and Cathy have run the Pepperdine Scotland exchange since creating it in 2012. In 2014 the Arts Council of England and UKBA endorsed him as an artist of Exceptional Promise for this and other related work. Over the last few years Alex has worked in relevant capacities across his fields of expertise with The Citizens’ Theatre, Tron Theatre, The Arches, The Traverse, The Royal Conservatoire of Scotland, Bard In The Botanics, Muse of Fire Theatre Company (Chicago), Washington and Lee University (Virginia), Lewis and Clark College (Oregon), and Chicago Shakespeare Theatre, among many others. As part of international collective Runamuck, Alex is co-creating and performing in Believe None of Us, which is due to begin touring in 2018.