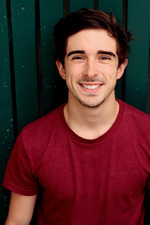 Will Craig (Ensemble) is a senior theatre major with an emphasis in acting originally from Arlington, TX. He has most recently been seen at Pepperdine as Orpheus in Eurydice (2017); Wyatt in Crazy for You (2016); Peter in Heritage (2016); Readymoney Matt in The Threepenny Opera (2016); multiple characters in Almost, Maine (2015); Pantalone in The Servant of Two Masters (2015); Mr. Reed in These Shining Lives (2015); and Father Flynn in Doubt, A Parable (2014). This past summer Will was a member of the Pepperdine Scotland Company that premiered The Interference at the Edinburgh Festival Fringe. He is a George Pepperdine and theatre scholar recipient. Will is also a member of Alpha Tau Omega Fraternity.