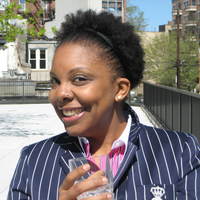 Jacquetta Szathmari is a New York based producer, writer, and performer. Her sharp tongued comedy has been called “crackingly smart, funny, philosophical, and often politically incorrect” by the LA Weekly. Her one woman show “That’s Funny. You Didn’t Sound Black on the Phone” was a Backstage Critic’s Pick and a 2010 Hollywood Fringe Festival Best Comedy Nominee. Her writing has been featured in the New York Times Best Seller “How to Be Black” by Baratunde Thurston as well as “Don’t Bring Home a White Boy” by Pulitzer Prize-winning journalist Karen Hunter. Szathmari has hosted and performed in comedy clubs all over NYC including the New York Comedy Club, the PIT, and UCB. She is the founder and artistic director for The Festival of the Offensive which is dedicated to showcasing live performance that pushes the envelope. You can find her podcasts Hey You Know It and Regular Black Women on iTunes.