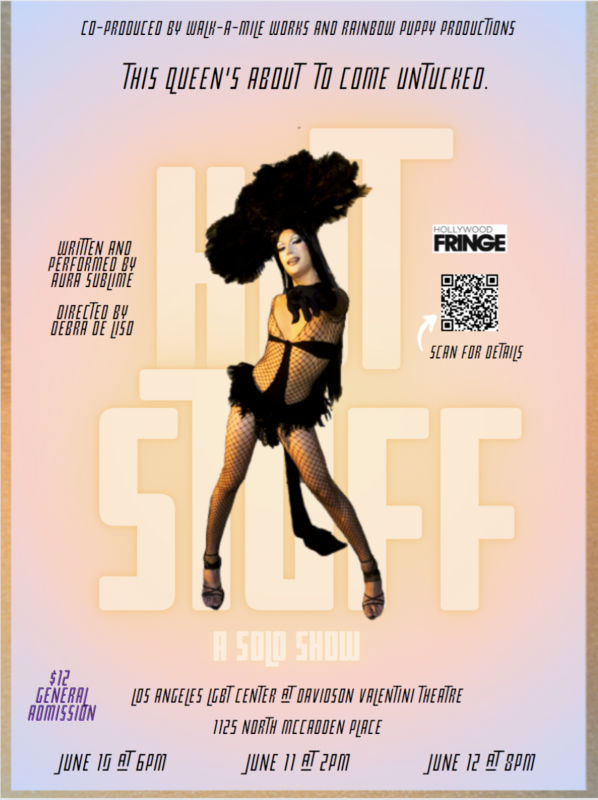 In bittersweet conversations with their mother and ludicrous flirtations with a lover, Gen-Z drag queen Aura Sublime unravels and reconstructs during this irreverent 30-minute dark comedy.

Lights up as Aura Sublime performs a disco boogie lip synch number for the Gods, who she hopes stand behind her floor length mirror. Caught off guard by a phone call from her mother, Aura realizes just how messed up her life (and the world) truly is. Through the irreverent and chaotic unraveling of this neurotic drag queen, the audience finds themselves pulled behind the veil and amidst the voracious humanity which drives those who perform the greatest egos. Both self-deprecating but honest.

“There’s something about stardom that I find appealing. I don’t know what that is. I haven’t sorted it out yet. I know it’s bad – it’s dangerous, cause it’s actually bad (smokes vape) — but this suffocation through yearning, grasping, and pining is something I inherited…”

PERFORMER’S BIO:
As a recent graduate and recipient of USC’s School of Dramatic Arts’ Jack Nicholson Award, Brett Morachnick (Aura Sublime) is an emerging talent in LA. Having worked in TV and film projects including American Crime Story, American Horror Story, and other American tales, Brett finds their way to Los Angeles through route of Tokyo, Switzerland, and many of the United States. Career highlights include Ned Weeks in The Normal Heart directed by Christopher Shaw and the words “there were many entertainers tonight, but there was only one Beyonce” from Mo Heart of RuPaul’s Drag Race. He finds the most value in his artistic tribe and is so excited to go on this journey with fellow Hollywood Fringers this Summer.

DIRECTOR’S BIO:
Debra De Liso is a critically acclaimed actor, writer, and director. She delights in the development of original solo plays and films with new and seasoned writers. Debra is the recipient of the Rainbow Award from the LA Women’s Theatre Festival for her decades of work in forgotten communities, including artists with disabilities, institutionalized teens, and incarcerated women. She has dramaturged and directed over 700 original solo plays which have garnered several awards in Los Angeles and New York City, as well received plays at the Edinburgh Fringe Festival.

After writing her master’s thesis The Physicalization of a Role, she received a fellowship to earn her M.F.A. at UCLA where she wrote her first solo play The Nurse June Show about her disabled mother. Debra developed Theatre of Compassion playwriting workshops to build healing bridges by stepping into another person’s life for an evening of theatre. She continues to enjoy teaching theatre classes at AADA and USC for over twenty years. Debra’s theatre into film production company, Walk A Mile Works, elevates original projects for voices that are not always heard.
For more info see www.debradeliso.com