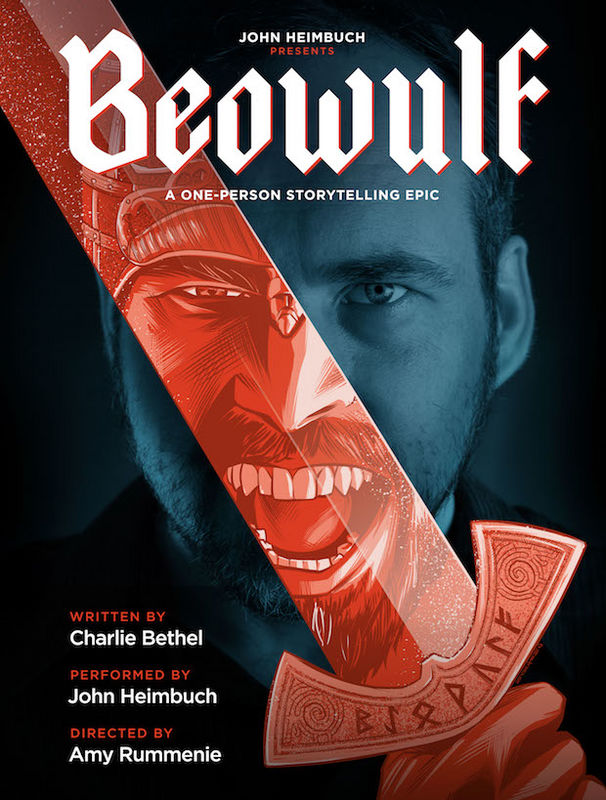 “I wish I could’ve seen a presentation like this when I was first introduced to Beowulf, it is perfection.” – Hot Chocolate Media

“Both the script and performance are gems. It was as pure a night of theater as I have ever seen. See this show.” – Minnesota Fringe audience review

Warning: BEOWULF includes descriptions of fantasy violence, appropriate for ages 10 and up.

JOHN HEIMBUCH (performer) is an award-winning writer, director and actor for stage and screen. He is the Co-Artistic Director of Walking Shadow Theatre Company in Minneapolis. His original plays WILLIAM SHAKESPEARE’S LAND OF THE DEAD and THE LEGEND OF SLEEPY HOLLOW have been published by Concord Theatricals and produced at theaters around the world. He has been performing Charlie Bethel’s BEOWULF and GILGAMESH since 2019.

CHARLIE BETHEL (playwright) was the creator of numerous critically acclaimed solo shows, including Beowulf, Gilgamesh, The Odyssey, Call of the Wild, Seven Poor Travellers, and others which he performed at theatres and festivals around the United States. He passed away in 2017 and is deeply missed by his many friends and family.

AMY RUMMENIE (director) is an award-winning stage director and Co-Artistic Director of Walking Shadow Theatre Company in Minneapolis, where she has directed over 30 productions.

COVID POLICY – Due to the close proximity of the venue, MASKS and PROOF OF VACCINATION will be required at the show.