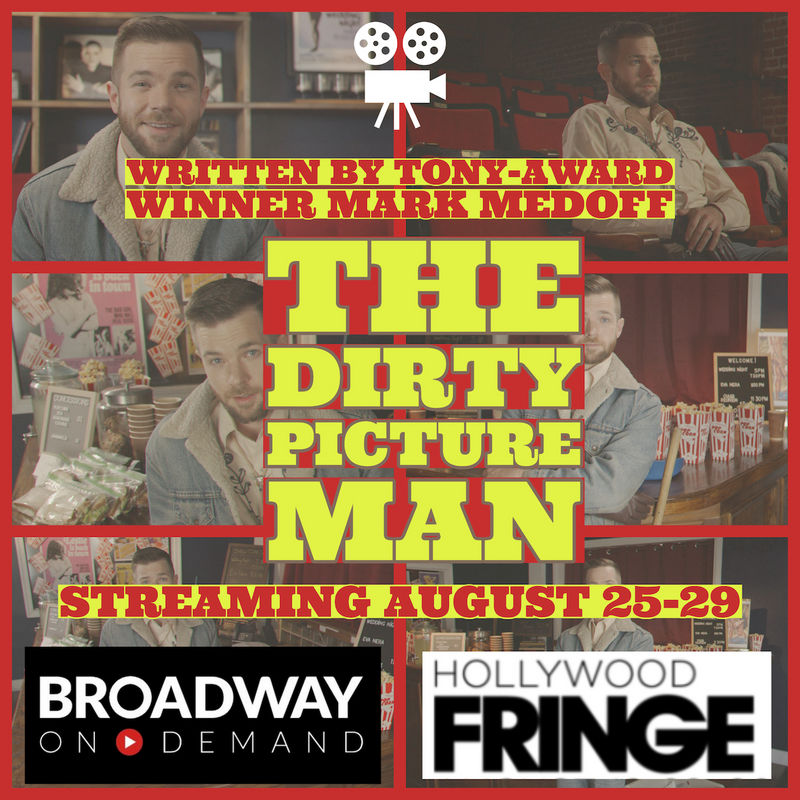 “Written by Tony-Award Winner Mark Medoff (Children of a Lesser God), In THE DIRTY PICTURE MAN, Stephen Ryder is a twenty-seven-year-old Vietnam veteran who manages a pornographic movie theater in Austin, Texas. In this engrossing monologue, he reveals the events of his life that led to such an “undignified” profession—his numbing, sometimes disquieting duties in the cinema; his involvement with a local religious cult; his criticism of the Hollywood patriarchy; and the lingering doubts about his manhood.”

Pre-Recorded with an L.A. Film Crew

Featuring Bryan Daniel Porter as “Stephen Ryder”
Directed by Andrew Lynford
Tickets are for streaming— you can attend the stream at the designated time, but can also view it at any other time of the day you have purchased it for. Something comes up and you can’t watch until 9 pm? No worries, the link will still be available!

This Q & A will be with the actor/producer Bryan Porter, and will discuss the themes of the show (such as “Toxic” Masculinity, and where it comes from). Please join us!

Best known from “Dear White People”, Bryan has had roles in productions distributed by Lionsgate (DWP), ABC (In an Instant), Disney (Battle Universe), BET (Real Husbands of Hollywood), Nickelodeon (Paw Patrol, Blaze and the Monster Machines); and commercials for Target, Best Buy, Apple, Microsoft and others. He has voiced lead characters in several internationally distributed videogames, such as Ori and the Will of The Wisps, Magic: The Gathering, and an upcoming Square Enix project for Nintendo. He honed his acting skills in over 40 professional stage productions around the United States, Including Tony Award-winning venues like the Mark Taper Forum, Guthrie Theater, and Children’s Theater Company.

He also produced the Award-Winning Short, “Attempt #1” (2020), which has played at a dozen festivals internationally.

Bryan’s undergraduate degree is in Digital Media Theory with a minor in Creative Writing (Non-Fiction), and he is currently pursuing his Master’s in Psychology in his spare time, with an emphasis on Addiction and Cognitive Disorders.

He is represented by KMR.

Andrew Lynford is from the UK but now resides in LA. After years as a successful actor of profile, he moved into writing comedy for television and directing in the theatre and TV.
He has many directing credits throughout the UK and here in the US, including major tours, regional & off-West End. He now works extensively as a casting director until recently ran the casting office at Center Theatre Group. In recent times, he has cast Sir Ian McKellen in ‘Hamlet’, the National Tour & West End production of ‘Heathers-The Musical’ and shows for Netflix, the BBC & Amazon.