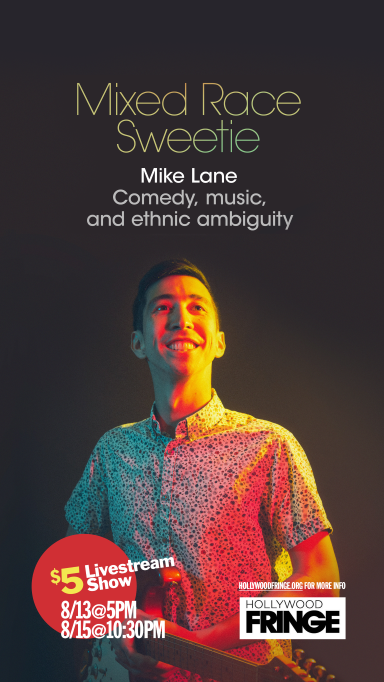 Written and performed by Mike Lane (half-Chinese, half-Irish), Mixed Race Sweetie is a solo comedy show that explores what it means to be mixed race today. Based on his life, Mike uses stories, sketches and songs to share his experiences as an idiot searching for an identity to call his own. Will he find one? How do you find one? Is it even worth finding one? Come see!

Mike uses humor, heart and hip exercises (not really, just needed a third H) to answer these burning questions and to explain the highs and lows of growing up mixed, being obsessed with early 2000’s pop punk and why ants are the best insects.

About the performer/writer: Mike Lane has spent the past ten years performing sketch at the UCB Theater in NY and LA. With his sketch group Boat, he performed at Montreal JFL and was a Comedy Central Comic To Watch. He has been seen on some TV shows like “Modern Family” and “Mom.” He played in a ska band in high school and he thanks his mom for supporting him even though she doesn’t understand why he can’t be a lawyer.