Another Divorced Dad in L.A. 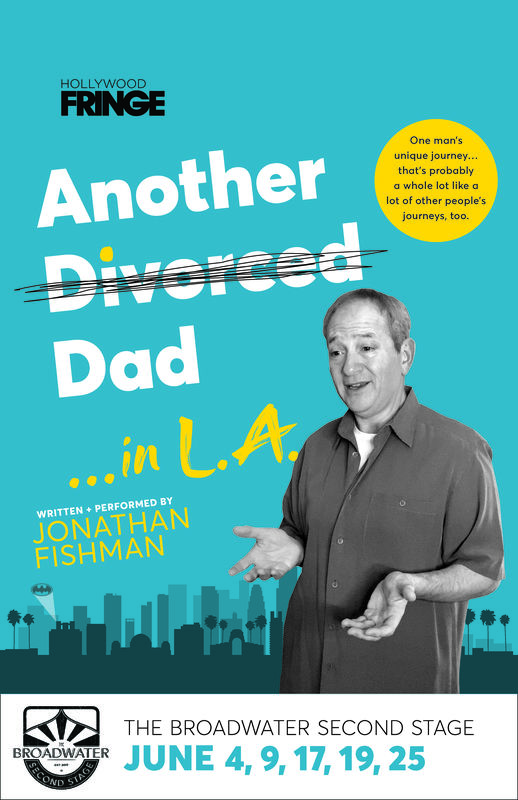 Nobody gets me, and its all my own fault because the inside me has no connection to the outside me. I realize I look like a perfectly normal well adjusted reasonably pleasant sort of fellow but inside I’m a raging lunatic. Basically an M&M, I have a sweet thin coating on the outside, but on the inside I’m processed stuff that’s really just a bunch of crap that’s not really any good for you… but still a tasty snack. ‘Another Divorced Dad in L.A.’ is my one-man show in which, among other things — having been asked by my son to speak at his upcoming wedding — I am trying to find the right words of wisdom to celebrate the newlyweds new lives together.

Jonathan Fishman is an award-winning actor and producer, About The Work teaching artist, stand-up, writer, father and son. His professional career spans over thirty years and includes national tours, regional theatre, film, tv, commercials, voiceover, screenwriting, editing, and much more. Jonathan’s one-man show, Another Divorced Dad in L.A. comes right on the heels of his appearing in the world premiere of ‘Blaze’ at the Hudson Theatre in Hollywood. Other theater credits include, producing and co-starring in the “Fringe First” winning production, ‘Enterprise’ at the 2017 Edinburgh Festival Fringe with follow-up run Off-Broadway at the SoHo Playhouse, as the “best of the world’s fringe shows.” He is also a founding member of the New York International Fringe Festival. On the motion picture front, Jonathan won an award for the script ‘A Family Affair’ he co-wrote, which he was commissioned to direct and co-produce as a short film sponsored by BASF and Filmaka. His most recently produced short ‘Waiting at Newkirk Avenue’ in which he also co-stars was an official selection at this year’s ‘Hang on to Your Shorts Film Festival’. On TV, Jonathan has been seen in HBO’s ‘Crashing’ and has also co-produced and starred in a new comedy pilot, BUDS, which is an official selection at this years ‘Dancing with Films’ screening at the TCL’s Chinese Theatres in June, a three-time 2021 Telly award-winner, and an official selection and finalist at the recent 28th Annual Austin Film Festival.