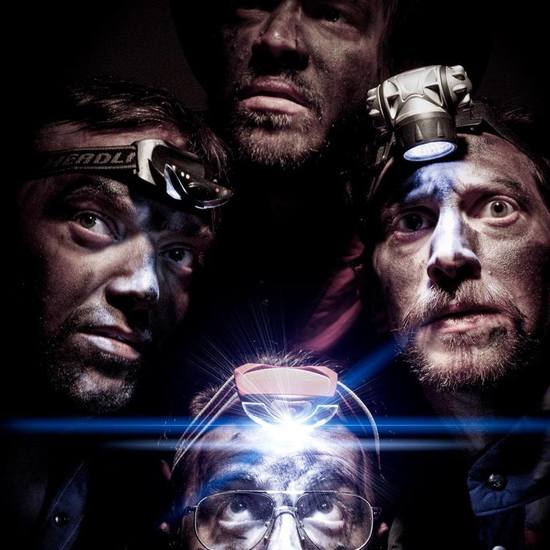 COAL MINING IN HOLLYWOOD
“BUTCHER HOLLER HERE WE COME”
A descent into the male psyche-in-crisis. A linguistic immersive experience entirely lit by headlamps

Butcher Holler Here We Come is a critically-acclaimed and award-winning original performance that descends into the interior landscape of the male psyche-in-crisis. ‘Toxic Masculinity’ is examined at its very source: five working class coal miners provide an archetypical cross-section of manhood which, when turned in on itself, negotiates a poetic and horrifying reckoning upon their own history. The result is a hallucinatory framework where secrets, lies, carnal desires, and traumatic lineages are unearthed and reversed. Other connotations of this toxicity are given dramatic voice through the politics of environmentalism, class, sexual orientation, and faith – all in a rapid-pace meditation on survival and the nature of reality itself. Told in near-to-total darkness, with the use of headlamps to illuminate the actors while they weave in and around the audience, the play invites a visceral, terrifying, and emotionally-wrought forging of manhood as it actively interrogates itself, against the backdrop forces of an un-anthropomorphic world. Proclaimed as “a jarring and fine introduction” to the festival by the New York Times, Butcher Holler Here We Come is a new American play that fuses the philosophy of Artaud’s Theatre of Cruelty with a poetic dialogue akin to Breece D’J Pancake’s short stories to provoke a deeply and socially-relevant conversation about gender, nature, economy, spirituality, and the phenomenology of storytelling, en masse.

Synopsis:
1973, West Virginia. Following a cave collapse, 5 coal miners struggle to survive the dwindling supply of oxygen, the lack of food and water, the unravelling sense of passing time, and, even more threatening, their own competing natures. Brutally weaving through family histories, complicated friendships, crooked politics, childhood visions, audacious hopes, eerie dreams, criminal addictions, and fervent spirituality in this run-of-the-mill Appalachian community, Butcher Holler Here We Come is a descent into the male psyche-in-crisis where secret desires, carnal urges, and hidden memories come boiling to the surface in a primitive territory of Earth that mirrors the subliminal mind.