"Life in the Middle Ages" 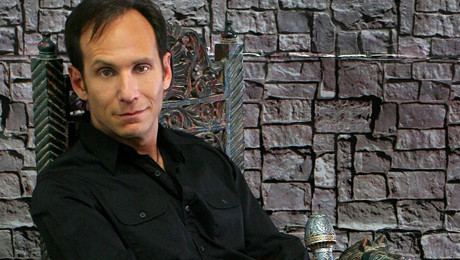 “I couldn’t think of a better way to pop my Hollywood Fringe Festival cherry. Very funny insights…with sincerity and humility. Nothing short of profound.”
Tony Frankel critic Stage and Cinema

“Foul-mouthed, glib, self-assured, and dead on! Ochs Gives us not just Illumination but Coping Skills if not a Downright Solution to our Fears.”
LA Splash

“Life in the Middle Ages” is a medieval-themed, multi-media, one-man comedy show that equates the horrifying epiphany that initiates midlife crisis with receiving a terminal diagnosis from your doctor, thus triggering the five stages of grief. Writer/performer Steve Ochs (pronounced “Oaks” like the Phil) takes aim at mortality, vitality and inevitable immobility in this fast-paced evening of laughs and tears. Raised by a comic and a shrink, Ochs successfully draws on the best of both worlds to make his point.

Over the course of 70 minutes Ochs exposes the many challenges adults confront during a midlife crisis. Many people at this stage of life think their feelings are unique to them; this communal exploration of aging could very well help define your state of mind and give you inspiration. This is not your typical one man show as the fourth wall is frequently broken and includes multimedia, comedy and audience interaction.

Strictly speaking to and for those experiencing middle age, adults of any age are welcome to attend but those under 30 should enter at their own risk knowing that the show comes with the following caution, “Warning: this show is rated NC-30. Attending may cause early onset midlife crisis in persons under thirty.”

If you watched a lot of stand up comedy live or on TV during the ’80s, you may remember Ochs as Steve O. — before the other guy got the name. Richard Pryor called him, “One Funny Motherf**ker,” New York Nightlife compared him to Lenny Bruce and the Orlando Sentinel called him, “Fast, Funny and Sometimes Biting.” He retired from the stage about 17 years ago, mostly due to lack of inspiration, but his midlife crisis has driven him back into the fray.