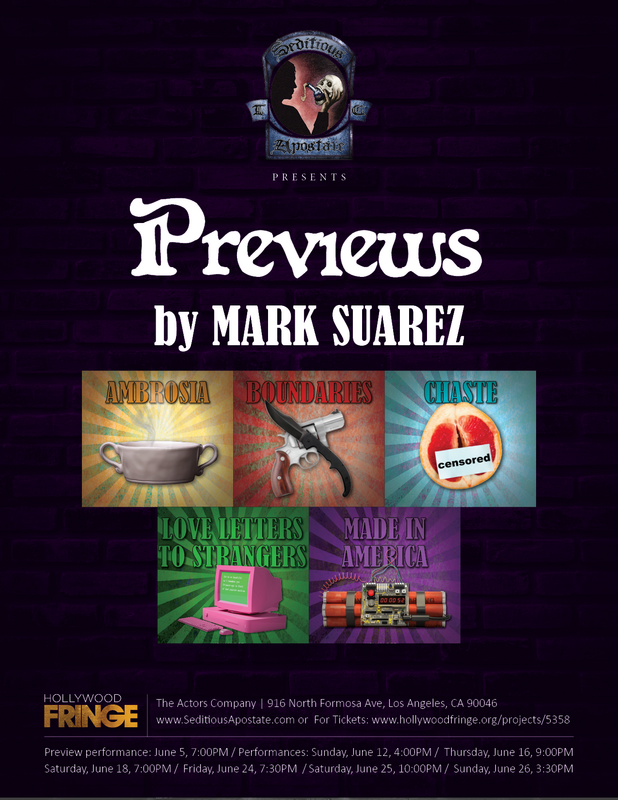 Previews is a sampling of the productions owned and offered by Seditious Apostate Theatre Company, LLC. At each performance, the performer will have prepared ten to fifteen minute highlights of three pieces from the company repertoire. The pieces that highlights will be selected from include: Ambrosia, Made in America, Boundaries: A martial arts live performance series, Chaste, and Love Letters to Strangers.

Ambrosia is part of Seditious Apostate’s Private Performance series of plays. It is an interactive piece where an immortal chef tells the story of how he discovered the food that makes him immortal while preparing it for the attendees at the party.

Boundaries is a live performance martial arts series that explores a world where individuals set and enforce their own boundaries. Private property is highly regarded. Personal space is respected. Everyone knows to mind their own business or face dire consequences.

What motivates a domestic terrorist? Made in America is a solo performance piece which attempts to answer that question.

I count romance novels among my guilty pleasures. Chaste is part of my Live Performance Series catalogue. In doing my research, I found that one of the defining characteristics of romance novels is that they get to the sex rather quickly. But, what if it didn’t get there at all? What if the whole story is about the build up?

Love Letters to Strangers is an immersive solo performance about a particular approach to online dating; and whether or not it works. It is also an exploration of a new approach in immersive theatre: 2nd person perspective.