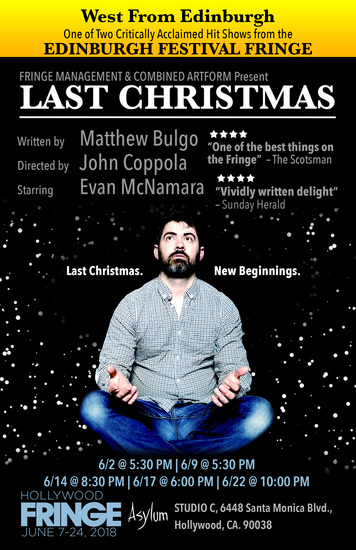 HOLLYWOOD ENCORE PRODUCERS’ AWARD Winner, tvolution.com Gold Medal Winner and #SeeItLA! Added show this Friday, June 29 @ 8:30 p.m.Tom is having a crap day. It’s Christmas Eve and he’s going to miss the train home. Clingy girlfriend Nat is following him into the bathroom. He can’t remember where he put the gifts she organized him into wrapping back in the summer . . . So begins this West Coast premiere by leading Welsh playwright Matthew Bulgo, which follows Tom as he is confronted by the ghosts of his past when he returns home for Christmas. Forced to face his demons, he attempts to rescue his family and his future. Will Tom be able to save it all in time? “One of the best things on the Fringe.” – The Scotsman