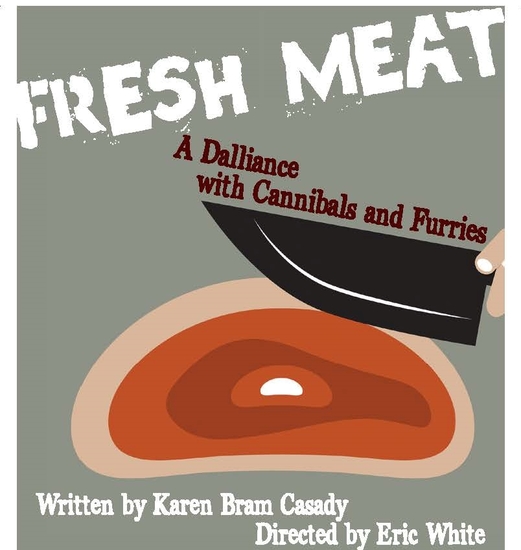 “Crazy comedy!! Furries! Cannibals! Every year there is one Fringe show that I like to name the, ‘What the hell was that?!?!?!’ show. This is the one for 2018. A madcap farce with over-the-top comedic moments, huge performances built on wide-eyed mugging and slapstick-style double takes, this reaches a completely unique tone unlike anything else in Fringe I have seen so far.” Russell Eaton, myhauntlife.com

“Furries and cannibals”….is there really anything else that needs to be said?…
Michael Fontaine, myhauntlife.com

“First time playwright Karen Casady’s playful look at the concept of a dystopian world of “eat or be eaten” cannibalism in the play smacks of the distant tales of giants and ogres harking back as far as the Greeks.” Leigh Kennicott, ShowMag.com

“Best half-hour frolic I’ve had in quite a while!” Rebecca Zavaleta, certified reviewer

A dark comedy with cannibals and furries whereby one small algorithm goes awry and all hell breaks loose.The setting of Fresh Meat is a dystopic society in which criminals are disposed of by anthropophagy – the eating of human flesh. Through some bureaucratic error, Peter, the butcher, is put in the position of carving up a person that he knows thus setting up the action in the play. The setting of Fresh Meat may look normal on the surface, but it is the societal values and laws that define it as an imaginary dystopia thus allowing cannibals, furries and others to engage in their respective shenanigans. That said, a simple way to put the message is: it’s a play about cannibals and furries and how we treat our friends.