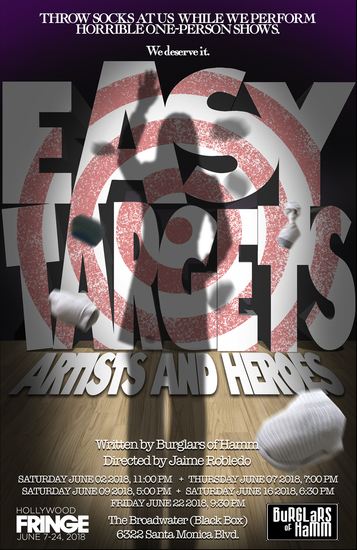 Winner of the HFF17 Best Comedy Award, EASY TARGETS returns with a brand new show!
EASY TARGETS is for every audience member who has sat in the dark at a bad play thinking they now know what prison must be like. It allows the audience to act out the fantasy of punishing their jailers. A satire of one-person-shows, EASY TARGETS presents 4 short solo shows and then invites the audience to show their “appreciation” by pummeling the performers with rolled-up socks any time they feel bored, annoyed, patronized, manipulated, etc. Each audience of EASY TARGETS forms a pack working to remind the performers, writers and designers that if they fail to respect the audience, they will suffer the sock.

“…the experience is incredibly fun and very cathartic, especially where de-stressing might be a goal after a hard day, week–or year! Run, don’t walk”
- Monique LeBleu, LA Beat

“I laughed so hard at one point, I worried that I was going to have a stroke.”
- Noah Nelson, No Proscenium

“…the performances, writing and directing in all of the pieces are so smart and funny that the sock barrage is far from a “ten-minute hate” – it’s more of a bonding experience.”
-Matt Richey, Gia on the Move

All About Me
Performed by Selina Merrill
Written by Jon Beauregard

After a ten year hiatus Selina Merrill makes her triumphant return in the role… of HER lifetime. All About Me is a close and personal look at the soul of a character actress. Some of the many, many characters you will meet at her show will haunt you long after the performance has ended.

We reach way down into the grab-bag of history and pull out one of the most controversial and enigmatic figures the world has ever known. You might be asking yourself “What actor dares to put on the shoes of one of the most provocative leaders in history?” We can answer that in six words. Eric. Curtis. Johnson. Is. Abraham. Lincoln.

Tracey Leigh was raised on the mean streets of Southern California. Luckily she had a way out in the form of spoken word poetry. Words were her drug and at this show, she’s gonna get all of us high. Yo!

Multi-Ovation Award nominee Hugo Armstrong takes the stage in perhaps the most difficult role of his illustrious career. As a hero space man, he must come to terms with the great unknown of space and the great unknown… within himself. A tour-de-force performance that will shake you to your core.

"space man (or how i found myself in low earth orbit)"

"an evening with abraham lincoln"